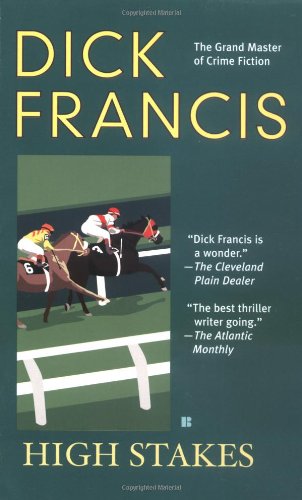 Steven Scott had no horse-racing experience, but with the guidance of his trainer and the prowess of a beautiful black hurdler, he has brought home several wins. But his winning streak comes to an end when he discovers trouble in his own stables. Reissue.

Steven Scott may have been a successful, wealthy inventor with no experience in horseracing, but with the inspired guidance of his trainer, Jody Leeds, and the prowess of a beautiful black hurdler named Energise, he has brought home several wins. But his winning streak is about to come to a fast end when he discovers trouble in his own stables trouble that could bring about his own termination if he doesn t watch his step "
"Few things are more convincing than Dick Francis at a full gallop." Chicago Tribune

"Francis captures our attention and holds us spellbound...All the breathless pace we have come to expect of this superb writer." The New York Times Book Review

"[The] master of crime fiction and equine thrills." Newsday

"Each Francis novel seems to be his best." The Sunday Oklahoman

"Few writers have maintained such a high standard of excellence for as long as Dick Francis." The San Diego Union-Tribune

"It's either hard or impossible to read Mr. Francis without growing pleased with yourself: not only the thrill of vicarious competence imparted by the company of his heroes, but also the lore you collect as you go, feel like a field trip with the perfect guide." The New York Times Book Review

"One of the most reliable mystery writers working today...Francis's secret weapons are his protagonists. They are the kind of people you want for friends." Detroit News and Free Press

"[Francis] has the uncanny ability to turn out simply plotted yet charmingly addictive mysteries." The Wall Street Journal

"For more than 30 years, Dick Francis has been mystery's Gibraltar, a sturdy rock in stormy straits. Nobody executes the whodunit formula better." Chicago Sun-Times"

Dick Francis (pictured with his son Felix Francis) was born in South Wales in 1920. He was a young rider of distinction winning awards and trophies at horse shows throughout the United Kingdom. At the outbreak of World War II he joined the Royal Air Force as a pilot, flying fighter and bomber aircraft including the Spitfire and Lancaster.

He became one of the most successful postwar steeplechase jockeys, winning more than 350 races and riding for Her Majesty Queen Elizabeth, the Queen Mother. After his retirement from the saddle in 1957, he published an autobiography, "The Sport of Queens," before going on to write more than forty acclaimed books, including the "New York Times" bestsellers "Even Money" and "Silks."

A three-time Edgar Award winner, he also received the prestigious Crime Writers Association s Cartier Diamond Dagger, was named Grand Master by the Mystery Writers of America, and was awarded a CBE in the Queen s Birthday Honours List in 2000. He died in February 2010, at age eighty-nine, and remains among the greatest thriller writers of all time."

GOR003113130
9780425209141
0425209148
High Stakes by Dick Francis (Fiction)
Dick Francis (Fiction)
Used - Very Good
Paperback
Penguin Putnam Inc
2006-04-04
N/A
Book picture is for illustrative purposes only, actual binding, cover or edition may vary.
This is a used book - there is no escaping the fact it has been read by someone else and it will show signs of wear and previous use. Overall we expect it to be in very good condition, but if you are not entirely satisfied please get in touch with us
Trustpilot