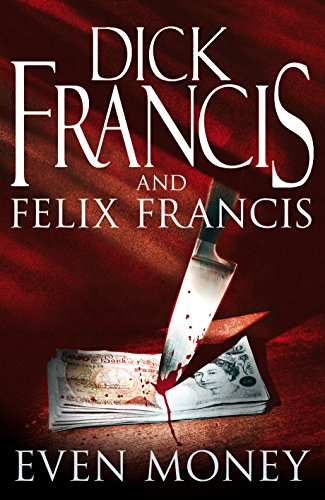 Even Money
by Dick Francis

Used Price
$14.49
inc. GST
Free Shipping in Australia
On the first day of Royal Ascot, the crowd rejoices in a string of winning favourites. Ned Talbot has worked all his life as a bookmaker so he knows not to expect any sympathy from the punters as they count their winnings. But when a grey-haired man steps forward from the crowd claiming to be his father, Ned's life is thrown into turmoil.
Very Good Good Well Read

Even Money by Dick Francis

Royal Ascot's first day, and bookmaker Ned Talbot watches helplessly as a string of favourites come in. With the punters totting up their winnings, he counts his losses. Then an old man steps forward with a very different claim. The father Ned never knew - long ago believed killed in a car crash - is standing before him.

Barely an hour later, Ned's newly-found father is dying in Ascot's car park. Stabbed by an unknown assailant, he warns Ned 'be very careful'. But of whom? Of what?

Ned races to discover the truth behind his father's disappearance and sudden reappearance. It's not just money on the line now. It's lives.

From Felix Francis and Dick Francis, the bestselling co-authors of Dead Heat comes Even Money, the latest Dick Francis novel. Packed with all the hair-raising suspense and excitement readers know and love from Dick Francis, Even Money is the most thrilling yet.

Praise for the Dick Francis novels:
'The Francis flair is clear for all to see' Daily Mail
'Spare, efficient and unflashy . . . inexorably draws you in' Daily Telegraph
'The master of suspense and intrigue' Country Life
'Still the master' Racing Post

Dick Francis was one of the most successful post-war National Hunt jockeys. On his retirement from the saddle, he published his autobiography, The Sport of Queens, before going on to write forty-three bestselling novels, a volume of short stories and the biography of Lester Piggott.

Dick Francis died in February, 2010, at the age of 89, but he remains one of the greatest thriller writers of all time.

Felix Francis is the younger of Dick's two sons. Since 2006, Felix has taken a more significant role in the writing, first with Dead Heat and then increasingly with the bestsellers, Silks and Even Money. Crossfire is the fourth novel of this father-and-son collaboration.

Dick Francis (Author)
Dick Francis was one of the most successful post-war National Hunt jockeys. The winner of over 350 races, he was champion jockey in 1953/1954 and rode for HM Queen Elizabeth, the Queen Mother, most famously on Devon Loch in the 1956 Grand National. On his retirement from the saddle, he published his autobiography, The Sport of Queens, before going on to write forty-three bestselling novels, a volume of short stories (Field of 13), and the biography of Lester Piggott.

During his lifetime Dick Francis received many awards, amongst them the prestigious Crime Writers' Association's Cartier Diamond Dagger for his outstanding contribution to the genre, and three 'best novel' Edgar Allan Poe awards from The Mystery Writers of America. In 1996 he was named by them as Grand Master for a lifetime's achievement. In 1998 he was elected a fellow of the Royal Society of Literature, and was awarded a CBE in the Queen's Birthday Honours List of 2000.

Dick Francis died in February 2010, at the age of eighty-nine, but he remains one of the greatest thriller writers of all time.

Felix Francis is the younger son of crime writer and National Hunt jockey Dick Francis, and over the past forty years Felix assisted Dick with both the research and the writing of many of his novels. Felix's love of racing, writing talent, and knowledge and experience as a physics teacher was invaluable in the father-and-son writing partnership.

GOR004570992
Even Money by Dick Francis
Dick Francis
Used - Very Good
Paperback
Penguin Books Ltd
2010-08-02
398
0141048840
9780141048840
N/A
Book picture is for illustrative purposes only, actual binding, cover or edition may vary.
This is a used book - there is no escaping the fact it has been read by someone else and it will show signs of wear and previous use. Overall we expect it to be in very good condition, but if you are not entirely satisfied please get in touch with us.