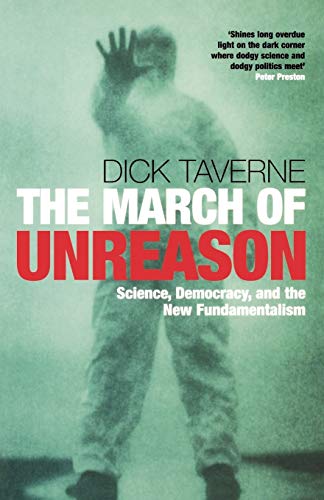 The March of Unreason
by Dick Taverne

In Stock
$16.49
+10% GST
The misguided belief that "nature is best" has resulted in the rise of alternative medicine and organic farming, in campaigns against vaccines like MMR, and in a concerted effort to block the development of GM crops - a technology that may greatly alleviate world hunger. Dick Taverne looks at the evidence, and examines the pessimism and distrust of science that has become rife in society.
Very Good Good
Only 4 left

The March of Unreason Summary

The March of Unreason: Science, Democracy, and the New Fundamentalism by Dick Taverne

Our daily news bulletins bring us tales of the wonder of science, from Mars rovers and intelligent robots to developments in cancer treatment, and yet often the emphasis is on the potential threats posed by science. It appears that irrationality is on the rise in western society, and public opinion is increasingly dominated by unreflecting prejudice and unwillingness to engage with factual evidence. From genetically modified crops and food, organic farming, the MMR vaccine, environmentalism, the precautionary principle and the new anti-capitalist and anti-globalisation movements, the rejection of the evidence-based approach nurtures a culture of suspicion, distrust, and cynicism, and leads to dogmatic assertion and intolerance. In this compelling and timely examination of science and society, Dick Taverne argues that science, with all the benefits it brings, is an essential part of civilised and democratic society: it offers us our most hopeful future.

The March of Unreason Reviews

Dick Taverne is Baron of Pimlico and a Q.C. Having been the Labour MP for Lincoln from 1962 to 1972, he resigned to fight the famous Lincoln by-election as an independent social democrat in 1973, and won. In 1974 he wrote The Future of the Left, Lincoln and After (Jonathan Cape), which predicted the split in the Labour party that happened seven years later. He gradually became more and more concerned about the increasing mood of hostility and suspicion about science and in 2002 founded the association 'Sense About Science' to promote an evidence-based approach to scientific issues. Lord Taverne is a high-profile political commentator, regularly debating issues of democracy and science in the broadsheet press.

Prologue ; 1. From optimism to pessimism ; 2. Medicine and magic ; 3. The myth of organic farming ; 4. The case for GM Crops ; 5. The case against GM Crops ; 6. The rise of eco-fundamentalism ; 7. The perils of precaution ; 8. The attack on science ; 9. Multinational companies and globalization ; 10. Reason and democracy ; Epilogue ; Index

GOR002663275
The March of Unreason: Science, Democracy, and the New Fundamentalism by Dick Taverne
Dick Taverne
Used - Very Good
Paperback
Oxford University Press
2006-11-30
320
0199205620
9780199205622
N/A
Book picture is for illustrative purposes only, actual binding, cover or edition may vary.
This is a used book - there is no escaping the fact it has been read by someone else and it will show signs of wear and previous use. Overall we expect it to be in very good condition, but if you are not entirely satisfied please get in touch with us.