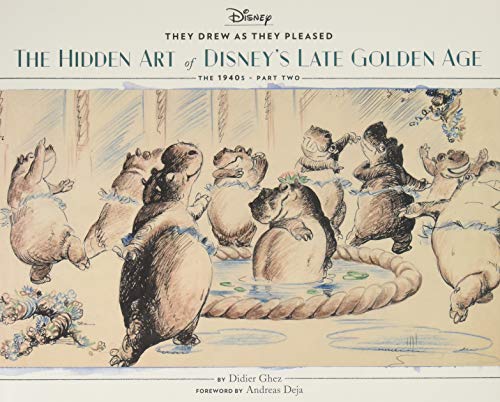 They Drew as They Pleased Vol. 3 by Didier Ghez

They Drew as They Pleased Vol. 3: The Hidden Art of Disney's Late Golden Age (The 1940s - Part Two) by Didier Ghez

Walt Disney always envisioned the studios that bear his name remaining relevant by consistently taking creative risks and doing the unexpected. Heading into the 1940s, he crafted an entirely new division of the studio called the Character Model Department, which focused solely on the details of character development. This latest volume from famed Disney historian Didier Ghez profiles six remarkable artists from that department, sharing uncommon and never-before-seen images of their influential work behind the scenes. With vivid descriptions and passages from the artists' journals, this visually rich collection offers a rare view of the Disney artists whose work gave rise to many classic Disney characters, and who ultimately rewrote the future of character creation in animation.

Copyright (c)2017 Disney Enterprises, Inc. All Rights Reserved
Didier Ghez has conducted Disney research since he was a teenager in the mid '80s. His articles about the parks, animation, and vintage international Disneyana, as well as his many interviews with Disney artists, have appeared in such magazines as Disney twenty-three, Persistence of Vision, Tomart's Disneyana Update, Animation Journal, Animation Magazine, StoryboarD, and Fantasyline. He is the author and editor of numerous books about the Disney Studio and its artists, including the Walt's People book series and the They Drew as They Pleased book series. He also runs The Disney History blog (disneybooks.blogspot.com) and The Disney Books Network website (www.didierghez.com).

Andreas Deja has worked as a Disney animator for over 30 years on many films including The Little Mermaid, Beauty and the Beast, Aladdin, The Lion King, Lilo & Stitch, and The Princess and the Frog. He was recently named a Disney Legend by the Walt Disney Company.