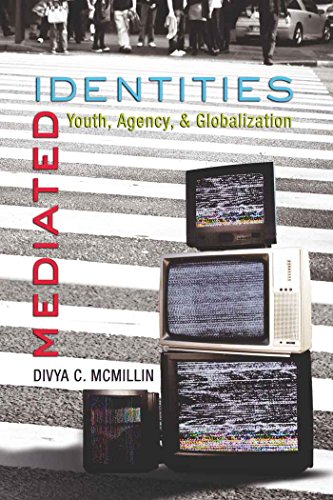 Mediated Identities is an empirical examination of how youth identity is negotiated in urban and rural spaces where cultural, economic, and political forces compete for the allegiance of the young consumer and worker. Rich with fieldwork on teens and television in India, Germany, South Africa, and the United States, the book provides a new direction for the critical discussion of youth agency. It questions young people as autonomous consumers and examines the interpellatory forces of media and market. The application of postcolonial theory produces an incisive analysis of television and other media consumption as part of a process that bolsters the neocolonial imperatives of globalization. Simultaneously, the book focuses on the opportunism on both sides of the equation, on youth particularly in developing economies and the industries that need their cheap labor. In such opportunistic contexts, Mediated Identities addresses ethical dilemmas and transformative possibilities.

"Divya C. McMillin asks vital and compelling questions about the construction of youth identities in an era of postcolonialism, neoliberalism, and transnational media. Her fieldwork in international locales offers insights into the cultivation of a 'global proletariat' in the context of the complex, vibrant, and hybridized youth cultures that crosscut the globe. Along the way, she provides nuanced theoretical insights that bring together cultural studies, theories of gender and identity, and production analysis in new and illuminating ways. Lucidly written and energetically researched, 'Mediated Identities' makes an invaluable contribution to the literature on youth and media by taking into account the realities of the twenty-first century." (Meenakshi Gigi Durham, Ph.D., Author of 'The Lolita Effect: The Media Sexualization of Young Girls and What We Can Do About It')
"In this theoretically sophisticated and ethnographically rich book, Divya C. McMillin succeeds in taking the study of youth and media in exciting new directions. Viewing culture as dynamic, and identity as constantly constructed and negotiated, McMillin goes beyond the Euro-American scholarship that has set the agenda for studies of mediated youth culture. Within a framework of postcolonial theory, she rethinks that agenda for the global mediascape, drawing on research with youth across several continents. This book will be welcomed by communication scholars, anthropologists, and all those interested in the processes of media globalization and their role in the cross-cultural experiences of youth." (S. Elizabeth Bird, Professor, University of South Florida)
"In this important book, Divya C. McMillin builds on her earlier work in international media studies to explore the complex lifeworld settings in which young people across four continents put media resources to use. Transcending old debates on agency, resistance, and identity, McMillin provides a rich account of young people's work, family, and social contexts under the pressures of neoliberalism and globalization. With much theoretical sophistication, this book sets out a new agenda for youth studies and comparative media studies, and should be widely welcomed." (Nick Couldry, Professor, Goldsmiths, University of London)
"Divya C. McMillin takes us on a fascinating, eye-opening journey into the dynamic working of structure and culture through her meetings with youth in their bedrooms, school yards, and cybercafes - as she theorizes about culture and identity in a global world. Empirically grounded, written with an eye sensitive to detail and context, and richly theoretical, this book enables the reader to gain a closer view of the everyday life of urban and rural youth as they negotiate and construct their identities in multicultural environments. While Euro-American readers gain access to a whole new way of seeing and understanding youth, those from non-western traditions will find their many voices represented in a colorful, vivid, and strongly engaging style." (Dafna Lemish, Professor, Tel Aviv University, Editor of the 'Journal of Children and Media')

GOR010662477
Mediated Identities: Youth, Agency, and Globalization by Divya McMillin
Divya McMillin
Mediated Youth
Used - Very Good
Paperback
Peter Lang Publishing Inc
2009-10-12
211
1433100975
9781433100970
N/A
Book picture is for illustrative purposes only, actual binding, cover or edition may vary.
This is a used book - there is no escaping the fact it has been read by someone else and it will show signs of wear and previous use. Overall we expect it to be in very good condition, but if you are not entirely satisfied please get in touch with us.