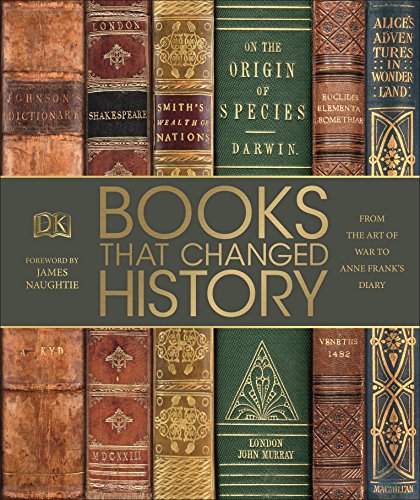 Books That Changed History
by DK

Books That Changed History: From the Art of War to Anne Frank's Diary by DK

Featuring a foreword by James Naughtie.

Turn the pages of the most famous books of all time and marvel at the stories behind them. Over 75 of the world's most celebrated, rare, and seminal books are examined and explained in this stunning treasury.

Books That Changed History is a unique encyclopedia spanning the history of the written word, from 3000 BCE to the modern day. Chronological chapters show the evolution of human knowledge and the changing ways in which books are made. Discover incredible coverage of history's most influential books including the Mahabharata, Shakespeare's First Folio, The Diary of Anne Frank, and Penguin's first ever paperbacks.

From Darwin's groundbreaking On the Origin of Species to Louis Braille's conception of the Braille system that we still use today, these are world famous books that have had the biggest impact on history.

Every book is presented with breathtaking photography and fascinating biographies of those who created them. Books That Changed History gathers dictionaries, diaries, plays, poems, treaties, and religious texts into one stunning celebration of the undisputed power of books.

James Naughtie is an award-winning radio presenter and broadcaster, who began his career as a journalist before moving to radio presenting in 1986. For over 20 years he co-presented on BBC Radio 4's Today programme, and he has chaired Radio 4's monthly bookclub since it began in 1997. James Naughtie has chaired both the Man Booker and Samuel Johnson judging panels and written a number of books including The Rivals: The Intimate Story Of A Political Marriage; The Accidental American: Tony Blair And The Presidency; The Making Of Music; The New Elizabethans and The Madness of July.

GOR008821180
Books That Changed History: From the Art of War to Anne Frank's Diary by DK
DK
Used - Very Good
Hardback
Dorling Kindersley Ltd
2017-09-07
256
0241289335
9780241289334
N/A
Book picture is for illustrative purposes only, actual binding, cover or edition may vary.
This is a used book - there is no escaping the fact it has been read by someone else and it will show signs of wear and previous use. Overall we expect it to be in very good condition, but if you are not entirely satisfied please get in touch with us.