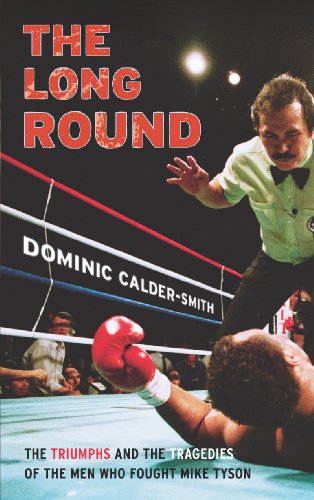 The Long Round by Dominic Calder-Smith

Everyone knows the story of Mike Tyson's decline and fall, but what happened to the men he defeated during his irrepressible prime? This title deals with these men, tracing their lives from their upbringings and years of promise to their encounters with Tyson. It explores the pain they felt in defeat and their subsequent search for self-respect.

The Long Round by Dominic Calder-Smith

In the late 1980s heavyweight boxing was ruled by one man - Mike Tyson. No one could touch him, it seemed, but nonetheless a generation of fighters tried. From 1986 to 1989, Mitch Green, Reggie Gross, Marvis Frazier, Pinklon Thomas, Tony Tucker and Carl Williams all attempted to bring Tyson to his knees. They all failed.

Everyone knows the story of Tyson's decline and fall - the manchild who seemed poised to become one of the greatest boxers in history is now a disgraced relic - but what happened to the men he defeated during his irrepressible prime?

In The Long Round, Dominic Calder-Smith talks to these men nearly twenty years on - the Baptist minister, the drugs counsellor, the security guard at Ground Zero, the convicted assassin and many of their contemporaries - tracing their lives from their upbringings and years of promise to their encounters with Tyson and the present day.

The Long Round explores, openly and honestly, the pain they felt in defeat and their subsequent search for self-respect, their problems with drugs and relationships, their legal woes and financial mismanagements. Some of these men have forged new lives outside of boxing, others struggle to do so, a few even harbour impossible hopes of one last shot at the title.

The Long Round is the story of the fight game - a story of unfulfilled dreams and turbulent lives, of letting boxing go and making a fresh start. It is the story of what happens to fighting men when they move away from the spotlight of the prize ring and have to survive the game of life - the longest round of all.

One of the most fascinating books of the year * Independent *
[A] great read on those who had walk-on (and be-carried-out) parts in Tyson's life * Observer *
Among the lost and broken, the crazy and the dangerous, The Long Round is as compelling as it is compassionate -- Donald McRae
A talented writer... He loves boxing and knows the sport * The Ring *
Dominic Calder-Smith writes regularly on boxing for newspapers and magazines. He is the author of Tarnished Armour: Hopes & Fears in Heavyweight Boxing. He lives in Oxford with his wife and children.
GOR006077188
9780224083225
0224083228
The Long Round by Dominic Calder-Smith
Dominic Calder-Smith
Used - Very Good
Paperback
Vintage Publishing
2011-10-27
304
N/A
Book picture is for illustrative purposes only, actual binding, cover or edition may vary.
This is a used book - there is no escaping the fact it has been read by someone else and it will show signs of wear and previous use. Overall we expect it to be in very good condition, but if you are not entirely satisfied please get in touch with us
Trustpilot