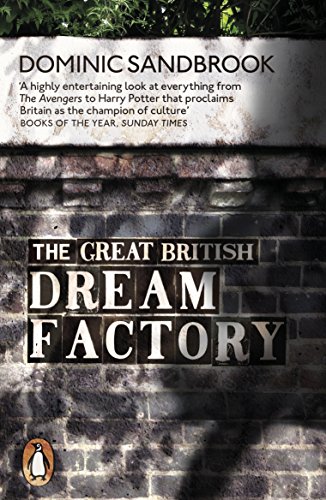 The Great British Dream Factory: The Strange History of Our National Imagination by Dominic Sandbrook

'Delightfully good ... an exuberant and learned celebration of British culture ... full of love for and fascination with everything from the origins of heavy metal in the metal-bashing industries of the West Midlands to John Lennon's and Damien Hirst's lust for money' Nick Cohen, Observer

'Terrific ... I defy you not to be swept up in a narrative that's as colourful as it is dramatic' - John Preston, Mail on Sunday

Britain's empire has gone. We no longer matter as we once did. And yet there is still one area in which we can legitimately claim superpower status: our popular culture.

It is extraordinary to think that one British writer, J. K. Rowling, has sold more than 400 million books; that Doctor Who is watched in almost every developed country in the world; that James Bond has been the central character in the longest-running film series in history; that The Lord of the Rings is the second best-selling novel ever written (behind only A Tale of Two Cities); that the Beatles are still the best-selling musical group of all time; and that only Shakespeare and the Bible have sold more books than Agatha Christie. To put it simply, no country on earth, relative to its size, has contributed more to the modern imagination.

This is a book about the success and the meaning of Britain's modern popular culture, from Bond and the Beatles to Catherine Cookson and Coronation Street, from Harry Potter, heavy metal and Kate Bush to Damien Hirst, Downton Abbey and Grand Theft Auto.

Delightfully good ... an exuberant and learned celebration of British culture -- Nick Cohen * Observer *
Not only thoroughly entertaining, but crammed with as many serious insights as a shelf-ful of academic studies. -- Alwyn W Turner * The Telegraph *
Relentlessly entertaining -- Daisy Goodwin * Sunday Times *
I read it in less than two days, my attention never flagging ... It is dramatic, perceptive and often extremely funny -- John Preston * Spectator *
I read it in less than two days, my attention never flagging ... Embracing everything from Black Sabbath's guitarist, Tony Iommi, losing his fingers in a sheet metal press to the 2012 Olympic opening ceremony, it's dramatic, perceptive and often extremely funny. * Books of the Year, Spectator *
It was hard to find a more convincing read ... a highly entertaining look at everything from The Avengers to Harry Potter that proclaims Britain as the champion of culture, spreading words and songs internationally like no other * Books of the Year, Sunday Times *
Sandbrook's hugely enjoyable analysis of why we continue to punch above our weight in this area ... covers everything from boarding school tales (Tom Brown to Harry Potter) to country house tales (Brideshead and Downton), the works of Tolkien to the 2012 Olympics. * Books of the Year, Mail on Sunday *
Terrific fun ... Sandbrook isn't like other historians ... He heads off down strange, neglected byways, teasing out unexpected connections, with the results often proving far more illuminating - and enjoyable - than conventional narratives ... I defy you not to be swept up in a narrative that's as colourful as it is dramatic. -- John Preston * Mail on Sunday *
Engrossing ... delightful ... a book that relishes an argument and likes to challenge received opinion ... not only thoroughly entertaining, but crammed with as many serious insights as a shelf-ful of academic studies. -- Alwyn Turner * Daily Telegraph *
Witty ... enthusiastic ... a passionate and admirable defence of coach-party musical theatre, large-print historical fiction, wedding reception rock, Orc sagas, To the Manor Born, Arnold Bennett, Billy Bunter and Billy Elliot ... The hot core of his story, though, is made of the most thrillingly unlikely material. -- Matthew Sweet * Guardian *
Splendid ... Sandbrook is always an engaging and perceptive writer and the subject lends itself to his eye for a story and his ability to connect with the reader. This is, after all, a book about the very things that, over the past century, we have most enjoyed, from Hercule Poirot to Sgt Pepper. -- David Aaronovitch * The Times *
Sparkling ... fascinating ... always enlightening ... as usual with Sandbrook, there are some lovely vignettes and incongruous details ... Academic writers could certainly learn something from his lightness of touch and ability to build an argument. -- Joe Moran * Literary Review *
Beautifully written ... wonderfully counter-intuitive ... with an excellent feel for the contemporary pulse and the surprising killer detail ... I, too, have left out loads that Sandbrook has cleverly and incisively included. -- Nick Curtis * London Evening Standard *
A marvellous read ... juicy, irresistible, restoring the past with all its delight, defeats and energy to the ageing spectator ... He delights in the sheer, tumbling crowdedness of British popular culture over the past half century or so, crams in at a terrific pace the innumerable stories of its successes, and lends the status of heroism to his favourite figures. The author catches with infectious excitement the cracking pace and headlong productivity of this teeming crowd. -- Fred Inglis * Times Higher Education Supplement *
Masterly ... lively and stimulating ... He loves to debunk received opinion. -- Robert Low * Standpoint *
A vivid, endlessly fascinating account of the numerous achievements of this country's national imagination. This book is my personal dream factory ... so invigorating and exciting. -- Jessie Thompson * Huffington Post *
Defiantly populist ... Dominic Sandbrook zestfully charts the route that has taken Britain from 'workshop of the world' to 'cultural superpower' ... as Sandbrook rightly insists, 'we still live in the shadow of the Victorians -- Boyd Tonkin * Independent *
Brilliant. -- A N Wilson * The Tablet *
An engaging and very accessible history book about our modern artistic achievements that, provocatively, also debunks some of the very icons it praises. -- Simon Copeland * The Sun *
I loved this book about British culture, partly because there's so much in it, and partly because of the brilliant way the author joins the dots ... Sandbrook gets us thinking about cinema, art, country houses, Tolkein, Doctor Who, and, superbly, much more. -- William Leith * Evening Standard *
An entertaining trawl through British culture ... [Sandbrook] has produced a book that is not only thoroughly enjoyable to read, but also crammed with as many serious insights as a shelf of academic studies * The Times *
It's a great premise, and I dived into, and splashed around in, this book gleefully at first. Here were lucid and often amusing expositions on the work of Lennon and McCartney, Ian Fleming, JRR Tolkien, Christie ... in his books on Britain in the 1950s and 60s, Sandbrook has covered some of this ground before. But he doesn't repeat himself, and his scope is wider than heretofore - he notices, for instance, how ingrained Charles Dickens's influence is, still, in popular entertainment ... It would be impossible to please everyone. But when Sandbrook is pleasing, he is very pleasing indeed. -- Nick Lezard * Guardian *

Dominic Sandbrook's most recent book for Penguin was Seasons in the Sun: The Battle for Britain, 1974-79. He is the presenter of a number of highly successful BBC television series, on subjects as diverse as the joys of the Volkswagen and the history of science fiction. He writes reviews and articles principally for the Daily Mail and Sunday Times.

GOR008341313
The Great British Dream Factory: The Strange History of Our National Imagination by Dominic Sandbrook
Dominic Sandbrook
Used - Like New
Paperback
Penguin Books Ltd
2016-09-01
688
0141979305
9780141979304
N/A
Book picture is for illustrative purposes only, actual binding, cover or edition may vary.
The book has been read, but looks new. The book cover has no visible wear, and the dust jacket is included if applicable. No missing or damaged pages, no tears, possible very minimal creasing, no underlining or highlighting of text, and no writing in the margins.