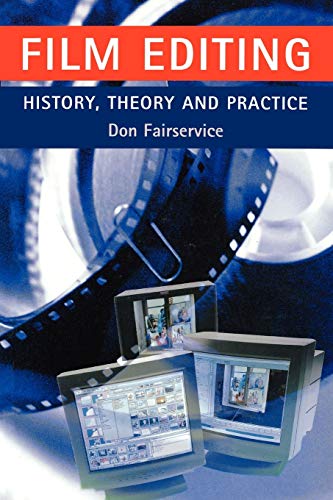 In Stock
$14.49
+10% GST
This examination of the film editor's craft ranges from the beginning of cinema to the 21st century. Film editing, at its best when it goes unnoticed, is the least understood of the cinematic crafts. This book explains not only the "how" but also the "why" of this pivotal film making activity.
Very Good
5 in stock

Film Editing - History, Theory and Practice: Looking at the Invisible by Don Fairservice

The first-ever comprehensive examination of the film editor's craft from the beginning of cinema to the present day. Of all the film-making crafts, editing is the least understood. Using examples drawn from classic film texts, this book clarifies the editor's role and explains how the editing process maximises the effectiveness of the filmed material. Traces the development of editing from the primitive forms of early cinema through the upheavals caused by the advent of sound, to explore the challenges to convention that began in the 1960s and which continue into the twenty-first century. New digital technologies and the dominance of the moving image as an increasingly central part of everyday life have produced a radical rewriting of the rules of audio-visual address. It is not a technical treatise; instructive and accessible, this historically-based insight into filmmaking practice will prove invaluable to students of film and also appeal to a much wider readership.

"It offers many insights into silent film editing, as well as the editing of classic Hollywood pictures and some contemporary works." --"American Cinematographer"

GOR003244774
Film Editing - History, Theory and Practice: Looking at the Invisible by Don Fairservice
Don Fairservice
Used - Very Good
Paperback
Manchester University Press
2001-06-28
368
0719057779
9780719057779
N/A
Book picture is for illustrative purposes only, actual binding, cover or edition may vary.
This is a used book - there is no escaping the fact it has been read by someone else and it will show signs of wear and previous use. Overall we expect it to be in very good condition, but if you are not entirely satisfied please get in touch with us.