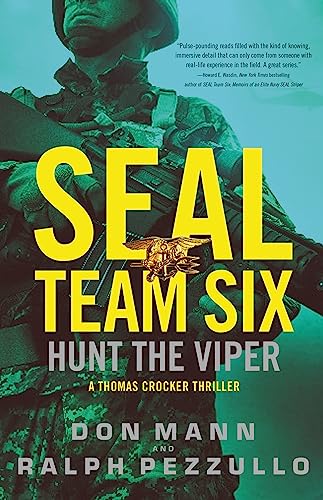 Out of Stock
$36.99
inc. GST
This timely military thriller finds SEAL Team Six and their humanitarian allies confronting a notorious ISIS general, the Viper, during his occupation of Aleppo, Syria.
Very Good
Only 0 left

This timely military thriller finds SEAL Team Six and their humanitarian allies confronting a notorious ISIS general, the Viper, during his occupation of Aleppo, Syria.

Despite the efforts of the Assad government and its Russian and Turkish allies, Syria is succumbing to the Islamic State. While Crocker and his SEAL Team Six comrades try to help a small Kurdish border town organize a resistance army, he finds an unexpected connection with Severine, a French epidemiologist working for Doctors Without Borders.

As Severine and her colleagues establish a makeshift hospital in besieged Aleppo, Crocker counsels caution. He knows too well that their NGO status will be no protection from the Viper, a notoriously vicious ISIS general with a deeply personal hatred of the West. When the Viper's men kidnap one of Severine's American colleagues, Crocker will pull every string at his disposal to launch a rescue mission. But in a situation where the US has no official business, he'll push every boundary of how far he's willing to go--and how far his SEAL brothers in arms will follow him--to save innocent lives.

"Pulse-pounding reads filled with the kind of knowing, immersive detail that can only come from someone with real-life experience in the field. A great series."--Howard E. Wasdin, New York Times best-selling author of SEAL Team Six Memoirs of an Elite Navy SEAL Sniper
PRAISE FOR THE SEAL TEAM SIX SERIES:

"The authors gives nuance and depth to Crocker's character . . . The conclusion is satisfying, with Crocker going entertainingly superhuman. . . . For the Tom Clancy/Dale Brown genre fan, Mann and Pezzullo provide enough excitement to while away a weekend."--Kirkus Reviews

"The pace is relentless, and the inside knowledge of how the SEALs operate again gives this series its appeal. . . . For action fans, Crocker continues to deliver."--Jeff Ayers, Booklist
"A riveting and accurate description of how special operations units actually conduct counterterrorist operations in the field. . . . If you are interested in reading a suspenseful, action-filled novel written by the 'real deal' instead of some amateur wanna-be, pick up this book, or any of those in the SEAL Team Six series."--James Blount, former supervisor at the Central Intelligence Agency
"As real as it gets! Hunt the Viper reads like it was pulled from official mission traffic. Forget silly TV shows and movies, this book will show you exactly what it's like to be an operator at the tip of the spear. Don Mann and Ralph Pezzullo's SEAL Team Six series are the most authentic military thrillers on the market. Period. End of discussion."--Douglas Laux, former CIA Field Operative and New York Times bestselling author of Left of Boom

Don Mann (Author)
Don Mann (CWO3, USN) is the author of the national bestseller Inside SEAL Team Six and a former Navy SEAL. He lives in Miami Beach, Florida.

GOR010219862
SEAL Team Six: Hunt the Viper by Don Mann
Don Mann
Used - Very Good
Hardback
Little, Brown & Company
2018-05-22
304
0316556408
9780316556408
N/A
Book picture is for illustrative purposes only, actual binding, cover or edition may vary.
This is a used book - there is no escaping the fact it has been read by someone else and it will show signs of wear and previous use. Overall we expect it to be in very good condition, but if you are not entirely satisfied please get in touch with us.