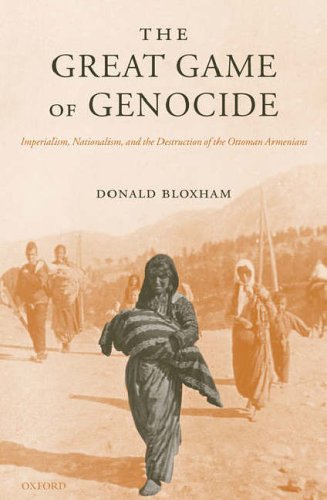 The Great Game of Genocide
by Donald Bloxham

Used Price
$73.99
inc. GST
Free Shipping in Australia
Approximately one million Armenian Christians were killed in 1915-16 under the auspices of the Ottoman government. This book provides an explanation for why it happened and why it has subsequently been overlooked, and offers a fresh interpretation, which places the genocide firmly in the context of international history.
Reviews:
Trustpilot
Very Good

The Great Game of Genocide Summary

The Great Game of Genocide: Imperialism, Nationalism, and the Destruction of the Ottoman Armenians by Donald Bloxham

The Great Game of Genocide addresses the origins, development and aftermath of the Armenian genocide in a wide-ranging reappraisal based on primary and secondary sources from all the major parties involved. Rejecting the determinism of many influential studies, and discarding polemics on all sides, it founds its interpretation of the genocide in the interaction between the Ottoman empire in its decades of terminal decline, the self-interested policies of the European imperial powers, and the agenda of some Armenian nationalists in and beyond Ottoman territory. Particular attention is paid to the international context of the process of ethnic polarization that culminated in the massive destruction of 1912-23, and especially the obliteration of the Armenian community in 1915-16. The opening chapters of the book examine the relationship between the great power politics of the 'eastern question' from 1774, the narrower politics of the 'Armenian question' from the mid-nineteenth century, and the internal Ottoman questions of reforming the complex social and ethnic order under intense external pressure.Later chapters include detailed case studies of the role of Imperial Germany during the First World War (reaching conclusions markedly different to the prevailing orthodoxy of German complicity in the genocide); the wartime Entente and then the uncomfortable postwar Anglo-French axis; and American political interest in the Middle East in the interwar period which led to a policy of refusing to recognize the genocide. The book concludes by explaining the ongoing international denial of the genocide as an extension of the historical 'Armenian question', with many of the same considerations governing modern European-American-Turkish interaction as existed prior to the First World War.

The Great Game of Genocide Reviews

The best discussion on the topic is now Donald Bloxham, The Great Game of Genocide : Imperialism, Nationalism, and the Destruction of the Ottoman Armenians Nicholas Doumanis, Historical Journal a very important book... a comprehensive and complex explanation based on serious scholarship. It is not for those who want easy answers and facile assignments of blame. Modern Greek Studies an important and original contribution to the historiography of the Armenian genocide and to the analysis of its denial by the Turkish authorities. American Historical Review a work of critical historical inquiry of breathtaking and often disturbing clarity that nevertheless withstands the pitfalls of cynicism and unmediated moral outrage... essential reading for scholars of nationalism, the Ottoman Empire, modern Turkey, Europe and the Middle East. Nations and Nationalism a uniquely important contribution to a bitterly divided field of historical inquiry... certain to generate controversy in and of itself. Middle East Journal [a] meticulously researched study History For the most lucid and broad-minded analysis of 1915 and the period leading up to it, read The Great Game of Genocide: Imperialism, Nationalism and the Destruction of the Ottoman Armenians, a recent book by the young British historian Donald Bloxham. Salon In this book Bloxham provides a valuable corrective historical interpretation and a fascinating case study in the 'geopolitics of memory'. Anyone interested in Ottoman and imperial history, the fate of the Armenians, or genocide will find The Great Game of Genocide both informative and stimulating. David Cesarani, Literary Review ... a detailed and sophisticated account...This first Class work offers much new material and is probably the most detailed and complex account in English of these terrible events Willian Rubinstein, The Times Higher

Introduction: Genocide and the Armenian Case; PART I: MASS MURDER IN AN INTERNATIONAL SYSTEM; 1. Prologue: Eastern Questions, Nationalist Answers; 2. Ethnic Reprisal and Ethnic Cleansing; Interlude The Genocide in Context; PART II: INTERNATIONAL RESPONSE AND RESPONSIBILITY IN THE GENOCIDE ERA; 3. Imperial Germany: A Case of Mistaken Identity; 4. Ethnic Violence and the Entente 1915-23; Interlude New Minority Questions in the New Near East; PART III: FROM RESPONSE TO RECOGNITION?; 5. The USA: From Non-Intervention to Non-Recognition; 66. Epilogue: the geopolitics of memory; Bibliography; Index

GOR006045775
The Great Game of Genocide: Imperialism, Nationalism, and the Destruction of the Ottoman Armenians by Donald Bloxham
Donald Bloxham
Used - Very Good
Hardback
Oxford University Press
2005-04-28
352
0199273561
9780199273560
N/A
Book picture is for illustrative purposes only, actual binding, cover or edition may vary.
This is a used book - there is no escaping the fact it has been read by someone else and it will show signs of wear and previous use. Overall we expect it to be in very good condition, but if you are not entirely satisfied please get in touch with us.