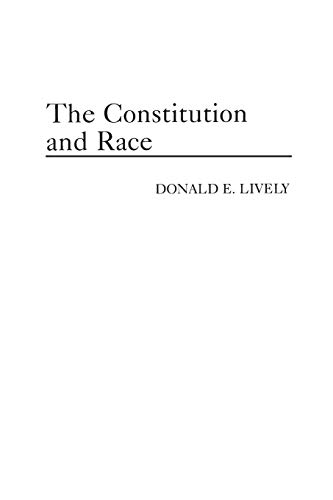 The Constitution and Race by Donald E. Lively

Examines the manner in which constitutional jurisprudence concerning race has prioritized, developed and remained unsatisfactory in its response to racial equality and civil rights issues from the time of the Constitutional Convention to the present day.

The Constitution and Race by Donald E. Lively

Race, as this book demonstrates, has been a factor in the Constitution's framing, ratification, and development. Examined specifically and in detail are: * the accommodation of slavery to create a viable republic; * the Union's experience with and eventual undoing by slavery; * reconstruction of the nation pursuant to seminal principles of racial equality; * persisting efforts to limit or defeat constitutional provisions for equality and opportunity; * the desegregation mandate and its devolution; and * modern problems in accounting for a legacy of racial discrimination and disadvantage. The Constitution is the overarching statement of popular will and consent and thus an especially apt prism through which to discern racial truths and the context and values that influence them. Constitutional law affords a particularly useful departure point for acquiring perspective upon moral reality and legal possibility. This book is rich in its analysis of the Supreme Court's response to society's ambiguities, concerns, and conscience in the matters of race. In examining problems and issues which historically have engendered dispute and division, it suggests a potentially consensual basis of ascertaining the Constitution's still unfinished business.

The nation's enduring ambivalence and the price it pays in less than consistent constitutional interpretations on racial questions is both enlightening and disturbing. The questions, of course, are at the heart of a democracy and involve personhood, citizenship, liberty, and equality. The Constitution and Race will be valuable to political scientists, historians, sociologists, lawyers, and students.

Preface Introduction Constitutional Law and Slavery Toward a More Perfect Union Constitutional Amendment and Doctrinal Development Separate But Equal Desegregation and the Anti-Discrimination Principle Color Blindness Revisited Original Imperatives and Doctrinal Possibility Bibliography Index
NLS9780275942281
9780275942281
0275942287
The Constitution and Race by Donald E. Lively
Donald E. Lively
New
Paperback
ABC-CLIO
1992-02-28
208
N/A
Book picture is for illustrative purposes only, actual binding, cover or edition may vary.
This is a new book - be the first to read this copy. With untouched pages and a perfect binding, your brand new copy is ready to be opened for the first time
Trustpilot