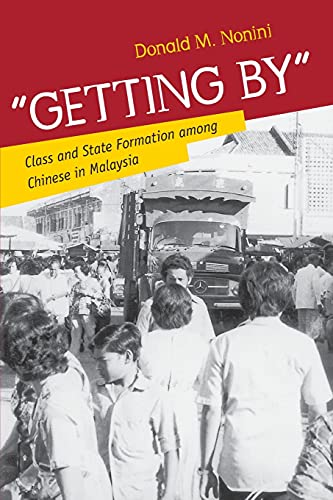 "Getting By"
by Donald M. Nonini

Used Price
$39,99
inc. GST
Free Shipping in Australia
How do class, ethnicity, gender, and politics interact? In what ways do they constitute everyday life among ethnic minorities? In "Getting By," Donald M. Nonini draws on three decades of research in the region of Penang state in northern West Malaysia, mainly in the city of Bukit Mertajam, to provide an ethnographic and historical account of...
Very Good

"Getting By": Class and State Formation among Chinese in Malaysia by Donald M. Nonini

How do class, ethnicity, gender, and politics interact? In what ways do they constitute everyday life among ethnic minorities? In "Getting By," Donald M. Nonini draws on three decades of research in the region of Penang state in northern West Malaysia, mainly in the city of Bukit Mertajam, to provide an ethnographic and historical account of the cultural politics of class conflict and state formation among Malaysians of Chinese descent.

Countering triumphalist accounts of the capitalist Chinese diaspora in Southeast Asia, Nonini shows that the Chinese of Penang (as elsewhere) are riven by deep class divisions and that class issues and identities are omnipresent in everyday life. Nor are the common features of "Chinese culture" in Malaysia manifestations of some unchanging cultural essence. Rather, his long immersion in the city shows, they are the results of an interaction between Chinese-Malaysian practices in daily life and the processes of state formation-in particular, the ways in which Kuala Lumpur has defined different categories of citizens. Nonini's ethnography is based on semistructured interviews; participant observation of events, informal gatherings, and meetings; a commercial census; intensive reading of Chinese-language and English-language newspapers; the study of local Chinese-language sources; contemporary government archives; and numerous exchanges with residents.

"'Getting By' offers a countervailingperspective by foregrounding a critical historicalnarrative of the processes of class and state formation ofthe Chinese in Malaysia.... The outcome is a masterful historical ethnography of how disparate formative processes and everyday practices intersect and overlap with one another over time to produce diasporic Chinese citizenship in Malaysia. Nonini's ethnography is especially compelling, rich, and nuanced given his deep lodes of data extracted from fieldwork begun in the late 1970s and supplemented with periodic returnvisits to his fieldwork site up to the late 2000s... 'Getting By' is an exemplary piece of engaged scholarship. It balances judiciously between theoretical sophistication and lucid prose and deserves to be read widely."

"The book as a whole is an excellent and innovative ethnographic study of the male Chinese population of Bukit Mertajam. Its strength lies in the integration of detailed ethnographic field data into the wider framework of Chinese society. This is a book worth reading for students of Malaysian society, modern history and economic development."

"In 'Getting By,' Donald M. Nonini draws on three decades of research in the region of Penang state in northern West Malaysia, mainly in the city of Bukit Mertajam, to provide an ethnographic and historical account of the cultural politics of class conflict and state formation among Malaysians of Chinese descent."

"The book is full of deep insights and fascinating detail of the decades from 1978 to 2007 in this Chinese urban population.... The span of fieldwork on which he bases his study provides a rich reflection on his own evolving ethnographic approach and his growing understanding of the ethnic and class politics and cultural styles performed over these years. It is a significant contribution to our understanding of post-Independence Malaysia society."

"Nonini's excellent and ethnographically grounded analysis speaks in important ways to anthropological and other social science literature on class struggle, formation and dialectics, the state and governmentality, and the essentialization of Chinese and other ethnoracial diaspora communities.... Finally, 'Getting By' is highly recommended to a general anthropological audience as a very readable ethnography, highlighting the best of ethnographic theory-building, tacking between (and critical of ) poles of overly linguistically oriented discursive post-structural analysis at one end and overly positivist structural analysis at the other."

"In this wide-ranging book, which covers some 30 years of research, anthropologist Nonini (Univ. of North Carolina, Chapel Hill) simultaneously presents some finely detailed ethnographic and historical reflections on the Chinese in Malaysia... The overall result is a book that is a very worthy addition to the comparative study of the lives of working-class men, to the analysis of the full social implications of Malaysian governmental structure and development strategies, and to the many meanings, realities, and contingencies of being in some way 'Chinese' but outside China. Essential for reference collections on globalization, East and Southeast Asia, and the meaning of 'Chinese' as an ethnic and national label."

Donald M. Nonini is Professor of Anthropology at the University of North Carolina at Chapel Hill. He is the author of British Colonial Rule and the Resistance of the Malay Peasantry, 1900-1957, coauthor of Local Democracy Under Siege: Activism, Public Interests, and Private Politics, and editor most recently of A Companion to Urban Anthropology.

Introduction: A Historical Ethnography of Class and State FormationChapter 1. Counterinsurgency, Silences, Forgetting, 1946-69Part I. Development (1969-85)Preface: Colonial Residues and "Development"Chapter 2. "Boom Town in the Making," 1978-80Chapter 3. "Getting By": The Arts of Deception and the "Typical Chinese"Chapter 4. Banalities of the Urban: Hegemony or State Predation?Chapter 5. Class Dismissed!Chapter 6. Men in Motion: The Dialectics of "Disputatiousness" and "Rice-Eating Money"Chapter 7. Chinese Society as "A Sheet of Loose Sand": Elite Arguments and Class Discipline in a Postcolonial EraPart II. Globalization (1985-97)Preface: Going GlobalChapter 8. Subsumption and Encompassment: Class, State Formation, and Production of Urban Space, 1980-97Chapter 9. Covert Global: Exit, Alternative Sovereignties, and Being StuckChapter 10. "Walking On Two Roads" and "Jumping Airplanes"Epilogue: 1997-2007Appendix: A Profile of Economic "Domination"?
Notes
References
Index

GOR010739703
"Getting By": Class and State Formation among Chinese in Malaysia by Donald M. Nonini
Donald M. Nonini
Used - Very Good
Paperback
Cornell University Press
2015-04-14
360
0801479088
9780801479083
N/A
Book picture is for illustrative purposes only, actual binding, cover or edition may vary.
This is a used book - there is no escaping the fact it has been read by someone else and it will show signs of wear and previous use. Overall we expect it to be in very good condition, but if you are not entirely satisfied please get in touch with us.