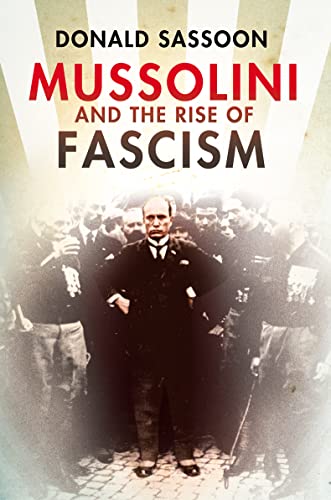 Mussolini and the Rise of Fascism
by Donald Sassoon

In this fascinating look at the unique conjuncture of factors surrounding Il Duce's seizure of power, eminent historian Donald Sassoon traces the political circumstances that sent Italy on a collision course with the most destructive war of the century.

Mussolini and the Rise of Fascism Summary

Mussolini and the Rise of Fascism by Donald Sassoon

In this fascinating look at the unique conjuncture of factors surrounding Il Duce's seizure of power, eminent historian Donald Sassoon traces the political circumstances that sent Italy on a collision course with the most destructive war of the century.

On the morning of 30 October 1922, Mussolini arrived in Rome to accept the premiership of a constitutional, conservative government. Within five years, however, his regime would morph into a dictatorship that neither his fascist supporters nor the conservative old order could have predicted, and Mussolini himself would be transformed from figurehead to despot.

A multiplicity of personalities and wider impersonal forces, including the social upheaval caused by the previous world war, combined to make possible the crisis of 1922 and the Fascist `March on Rome'. But in fact, Donald Sassoon argues, things could have gone very differently and the core focus of this illuminating study is not so much what happened, but how. How did Mussolini seize power so effectively that he maintained it for the next twenty years, until he dragged his country, disastrously, into World War II? Social fragmentation, unionization, inflation and nationalism all played a part in weakening the old political system, while Mussolini seemed to provide answers in a troubling new era. In the event, Il Duce's ruthless political ambition and cruel authoritarianism would surprise his supporters and opponents alike.

Mussolini and the Rise of Fascism Reviews

Praise for `The Culture of the Europeans':

`An absorbing, illuminating and enjoyable book...anyone with an interest in the development of culture...will find it interesting, informative and surprisingly entertaining. It is also packed with good sense.' Daily Telegraph

`Never less than penetrating in his comments...this...book shows how British historians such as Sassoon...now occupy the commanding heights of comparative European history and analysis.' Financial Times

Donald Sassoon is Professor of History at Queen Mary, University of London. He is author of several books, including `Contemporary Italy: Politics, Economy and Society Since 1945', `One Hundred Years of Socialism' (Fontana 1997), `Mona Lisa: The History of the World's Most Famous Painting' and `The Culture of the Europeans: From 1800 to the Present'.

GOR001426260
Mussolini and the Rise of Fascism by Donald Sassoon
Donald Sassoon
Used - Very Good
Hardback
HarperCollins Publishers
2008-01-21
224
0007192428
9780007192427
N/A
Book picture is for illustrative purposes only, actual binding, cover or edition may vary.
This is a used book - there is no escaping the fact it has been read by someone else and it will show signs of wear and previous use. Overall we expect it to be in very good condition, but if you are not entirely satisfied please get in touch with us.