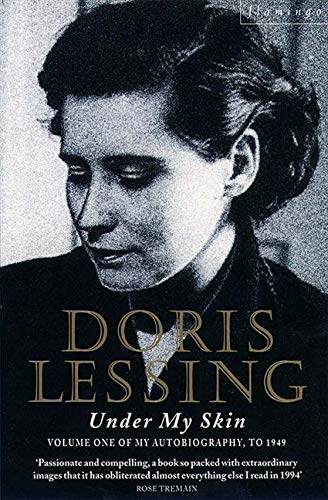 Under My Skin
by Doris Lessing

The first volume of the autobiography of Doris Lessing, author of `The Grass is Singing' and `The Golden Notebook', and Winner of the Nobel Prize for Literature 2007.

Under My Skin Summary

Under My Skin: Volume One of My Autobiography, to 1949 by Doris Lessing

The first volume of the autobiography of Doris Lessing, author of `The Grass is Singing' and `The Golden Notebook', and Winner of the Nobel Prize for Literature 2007.

Doris Lessing's autobiography begins with her childhood in Africa and ends on her arrival in London in 1949 with the typescript of her first novel in her suitcase.

It charts the evolution first of her consciousness, then of her sexuality and finally of her political awareness with an almost overwhelming immediacy, and is as distinctive and challenging as anything she has ever written.

It is already recognised as one of the great autobiographies of the twentieth century.

Customer Reviews - Under My Skin

Under My Skin Reviews

`Passionate and compelling, a book so packed with extraordinary images that it has obliterated almost everything else I read in 1994.' Rose Tremain

`In this immediate, vivid, beautifully paced memoir, Doris Lessing sets the individual against history, the personal against the general and shows, by the example of her life set down honestly, how biography and fiction mesh, how fiction transmutes the personal to the general, how the particular experience illuminates the universe. By putting her life on the page, she has created her greatest work of art.' Hilary Mantel, LRB

`The book pulsates with life. The intensity of the sensory world is brilliantly evoked ... Not just the story of the first thirty years of one life, this is the biography also of an age.' Jane Dunn, Observer

GOR001292283
Under My Skin: Volume One of My Autobiography, to 1949 by Doris Lessing
Doris Lessing
Used - Very Good
Paperback
HarperCollins Publishers
1995-06-23
432
0006548253
9780006548256
Winner of James Tait Black Memorial Prize (Biography) 1994
Book picture is for illustrative purposes only, actual binding, cover or edition may vary.
This is a used book - there is no escaping the fact it has been read by someone else and it will show signs of wear and previous use. Overall we expect it to be in very good condition, but if you are not entirely satisfied please get in touch with us.