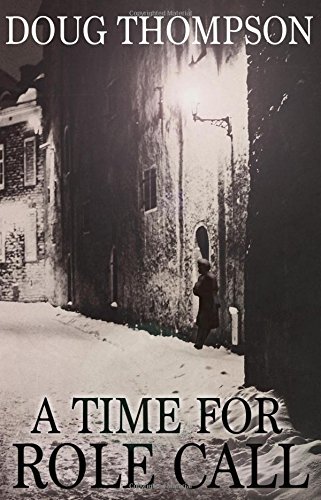 A Time for Role Call by Doug Thompson

It is 1946, and former debutante, Sally Jardine-Fell, is in prison, awaiting trial for a murder she didn't commit.

A Time for Role Call by Doug Thompson

It is 1946, and former debutante Sally Jardine-Fell is in prison awaiting trial for a murder she didn't commit.
Set mainly in wartime Italy, A Time for Role Call follows the strange, eventful path of Sally's life, taking us from blitzed London via Yorkshire, where Sally first meets the enigmatic Adam, to Fascist Rome and the bed of Count Galeazzo Ciano, Mussolini's Foreign Minister and the focus of Sally's Special Operations Executive (SOE) mission.
Following Ciano's sudden fall from grace early in 1943, Sally's mission is aborted. The subsequent Allied invasions, Mussolini's overthrow, and the German occupation lead her to quit Rome. With increasing difficulty and some hair-raising experiences, she makes her tortuous way north towards Switzerland. En route she encounters deserting German soldiers, an escaped Australian PoW, Italian brothers avoiding military service, mountain shepherds, a French nun, Italian partisans - as well as, all too briefly, the long-lost Adam.
Shortly after the war, back in London, Sally again meets with Silvio, an Italian restauranteur whom she had known there previously, her subsequent SOE superior, but whose loyalties she has long suspected. Aware of her suspicions, Silvio now tries to kill her. But it is he who dies, though not by her hand...
Former Professor of Modern Italian language, history and literature, Doug Thompson draws on his intimate knowledge of Italy to write a lively novel with a feisty protagonist and colourful cast of supporting characters. The book will appeal to readers of historically based fiction, those with an interest in Italy - especially the war years - or any who have enjoyed Doug's previous works, To the Great Sea (Matador, 2011) and Checkmate (Matador, 2013).
GOR008847887
9781788039888
1788039882
A Time for Role Call by Doug Thompson
Doug Thompson
Used - Very Good
Paperback
Troubador Publishing
2017-11-16
384
N/A
Book picture is for illustrative purposes only, actual binding, cover or edition may vary.
This is a used book - there is no escaping the fact it has been read by someone else and it will show signs of wear and previous use. Overall we expect it to be in very good condition, but if you are not entirely satisfied please get in touch with us
Trustpilot