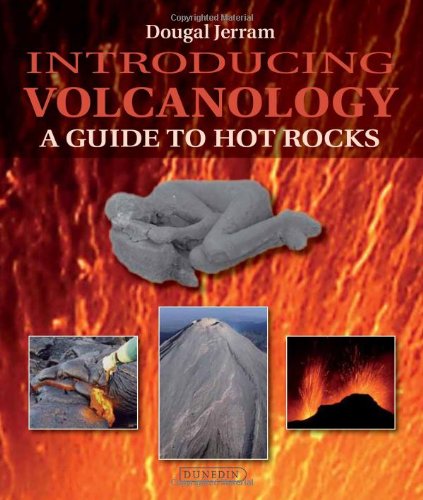 Volcanoes have an endless fascination. Dougal Jerram answers the questions: What are volcanoes? What other volcanic activity is there? Copiously illustrated throughout Introducing Volcanology is a concise and accessible introduction to the science of hot rocks.

Introducing Volcanology: A Guide to Hot Rocks by Dougal Jerram

Volcanoes have an endless fascination. Their eruptions are a regular reminder of the power of nature and our vulnerability to this raw geological phenomenon, however volcanic activity, and its plumbing from beneath, is an essential element of the forces that shaped and constantly reshape our planet. Dougal Jerram answers the questions: What are volcanoes? What other volcanic activity is there? How do volcanoes relate to plate tectonics and the movement of continents? What are eruptions and why do they occur? How have volcanoes affected the earth's climate? Can we predict eruptions? He also describes the most notable eruptions in history and their effect. Copiously illustrated throughout Introducing Volcanology is a concise and accessible introduction to the science of hot rocks for those with an adult curiosity and for those contemplating a course of formal study. As with sister volumes, technical terms are kept to a minimum and a glossary is provided covering the whole subject from ash to zeolites.

'This is the next book to be published in the popular "lntroducing..." range of earth science texts from Dunedin and, put quite simply, it is excellent.

'Teaching Earth Sciences 'This is the third in a series of earth science books published by Dunedin, the previous two of which (on palaeontology and geology) have been reviewed in this magazine. I said of those books that they were excellent little volumes for the beginner and the amateur, and the current book is no different.Written by the ubiquitous volcano specialist, Dougal Jerram (aka Dr Volcano), who was recently on television in the BBC's 'The hottest place on Earth' a film about an expedition to the lava lake of Erta Ale in Ethiopia, it is a nice little summary of the basics of the science of volcanology.

The subject matter inevitably cries out for good illustrations, and the explanatory diagrams and photographs in this guide are extremely good and certainly as good as the previous two volumes. In addition, the writing is easy to understand (there is also a glossary) and fluent. More importantly, the reader cannot be unaffected by the author's obvious enthusiasm, which comes through on every page.' Deposits

Dougal Jerram is an Earth Scientist at Durham University, and has a wide experience in both modern and ancient volcanoes and their products. An expert and enthusiastic geological communicator, he has been involved in scientific television programmes for the BBC, National Geographic, Discovery and History channels.

GOR007539557
Introducing Volcanology: A Guide to Hot Rocks by Dougal Jerram
Dougal Jerram
Used - Very Good
Paperback
Dunedin Academic Press
2011-10-17
128
1906716226
9781906716226
N/A
Book picture is for illustrative purposes only, actual binding, cover or edition may vary.
This is a used book - there is no escaping the fact it has been read by someone else and it will show signs of wear and previous use. Overall we expect it to be in very good condition, but if you are not entirely satisfied please get in touch with us.