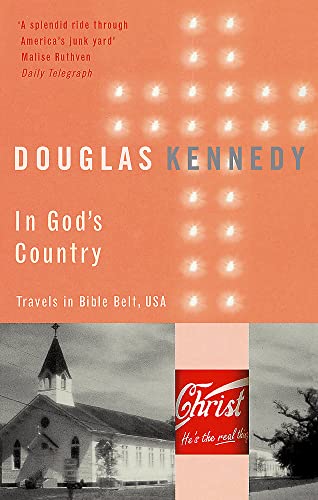 In God's Country
by Douglas Kennedy

Out of Stock
$13.49
inc. GST
*Travels through the extraordinary American bible belt
Very Good
Only 0 left

Though much has been written about the political implications of the religious revival which has engulfed America in recent years, a question remains unanswered: what pushes its people into 'declaring for Jesus'?

Douglas Kennedy spent a long hot summer cruising through that expanse of the American South known as 'The Bible Belt' exploring that question. In a remarkable journey into one of the strangest corners of the United States, Kennedy finds himself spending time in Miami with a one-time member of the Mafia turned charismatic preacher, discovering Christian heavy metal music in Nashville, and visiting Death Row in South Carolina with an evangelist who ministers to the condemned.

Repeatedly discovering the extraordinary within the ordinary, IN GOD'S COUNTRY is a profound, yet brilliantly entertaining exploration of life in late twentieth century America.

A splendid ride through America's spiritual junk yard * Malise Ruthven, THE DAILY TELEGRAPH *
A fascinating insight into both a country and Christianity * SUNDAY TIMES *
It took me closer to the saccharine yearnings of American religiousity than anything I have read * THE DAILY TELEGRAPH *
His book is decent, compassionate and funny. It needed to be written, and it certainly needs to be read * THE SUNDAY PRESS *

Douglas Kennedy is the author of many novels including THE DEAD HEART (now being filmed by the makers of PRISCILLA, QUEEN OF THE DESERT) and three travel books. Born in New York City in 1955, he lives in London with his wife and two children.

GOR001059838
In God's Country: Travels in Bible Belt, USA by Douglas Kennedy
Douglas Kennedy
Used - Very Good
Paperback
Little, Brown Book Group
1996-01-04
256
034910719X
9780349107196
N/A
Book picture is for illustrative purposes only, actual binding, cover or edition may vary.
This is a used book - there is no escaping the fact it has been read by someone else and it will show signs of wear and previous use. Overall we expect it to be in very good condition, but if you are not entirely satisfied please get in touch with us.