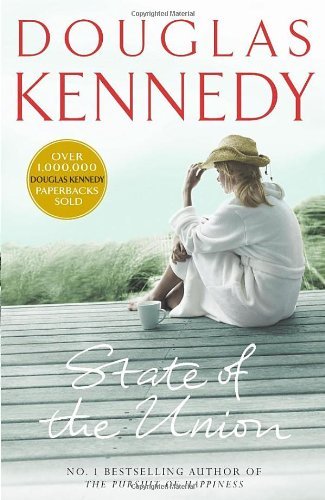 State Of The Union
by Douglas Kennedy

In Stock
$28.99
inc. GST
Raised in the creative chaos of 1960s America, Hannah vows to reject her parents' liberal lifestyle, and settles instead for typical family life in a nondescript corner of Maine. As her secret emerges, Hannah's life goes into freefall and she is left struggling against the force of the past.
Very Good
Only 3 left

State Of The Union Summary

State Of The Union by Douglas Kennedy

Hannah Buchan thinks herself ordinary. She is not the revolutionary child that her painter mother and famous radical father had hoped for. Raised in the creative chaos of 1960s America, Hannah vows to reject her parents' liberal lifestyle, and settles instead for typical family life in a nondescript corner of Maine.

But normality isn't quite what Hannah imagined it would to be, and try as she might to fight it, the urge to rebel against the things that hem her in grows ever stronger. Eventually, a series of encounters puts Hannah in an exhilarating but dangerous position - one in which she never thought she would find herself.

For decades, this one transgression in an otherwise faultless life lies buried deep in the past, all but forgotten - until a turn of fate brings it crashing back into the limelight. As her secret emerges, Hannah's life goes into freefall and she is left struggling against the force of the past.

State of the Union is a stunning and grippingly honest story about life, love and family, set against the backdrop of two different but strikingly similar eras.

State Of The Union Reviews

State of the Union has the feel of a handgun primed for Russian roulette. The climax, when past and future collide, is explosive * The Times *
The story is sit-up-until-3am readable, the wide-ranging cast of highly individual characters is beautifully handled * Sunday Times *
Kennedy is a complete genius when it comes to understanding the minds of stylish but troubled women. What's more, he does so enthrallingly and movingly * Daily Mirror *
Extremely clever and consistently engaging * Independent on Sunday *
A mesmerising page-turner * Sunday Express *

GOR004699724
State Of The Union by Douglas Kennedy
Douglas Kennedy
Used - Very Good
Paperback
Cornerstone
2006-06-01
608
B006RF774E
9780099468295
N/A
Book picture is for illustrative purposes only, actual binding, cover or edition may vary.
This is a used book - there is no escaping the fact it has been read by someone else and it will show signs of wear and previous use. Overall we expect it to be in very good condition, but if you are not entirely satisfied please get in touch with us.