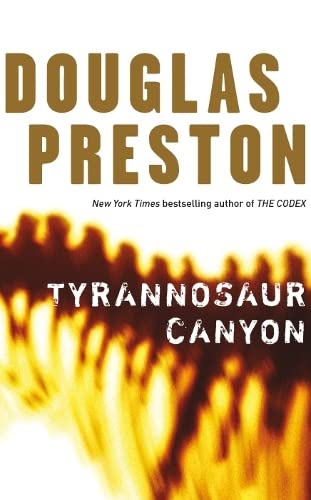 A scientist with ambition enough to kill . . .

A dark agency with a deadly mission . . .

The greatest scientific discovery of all time . . .

What fire bolt from the galatic dark shattered the Earth eons ago, and now hides in that remote cleft in the southwest United States known as . . . TYRANNOSAUR CANYON?

Douglas Preston, a regular contributor to The New Yorker, has worked for the American Museum of Natural History and taught English at Princeton University. With his frequent collaborator, Lincoln Child, he has authored many bestselling thrillers such as Relic, which became a major Hollywood motion picture.

GOR000456139
Tyrannosaur Canyon by Douglas Preston
Douglas Preston
Wyman Ford
Used - Very Good
Paperback
Pan Macmillan
2007-04-02
512
0330448641
9780330448642
N/A
Book picture is for illustrative purposes only, actual binding, cover or edition may vary.
This is a used book - there is no escaping the fact it has been read by someone else and it will show signs of wear and previous use. Overall we expect it to be in very good condition, but if you are not entirely satisfied please get in touch with us.