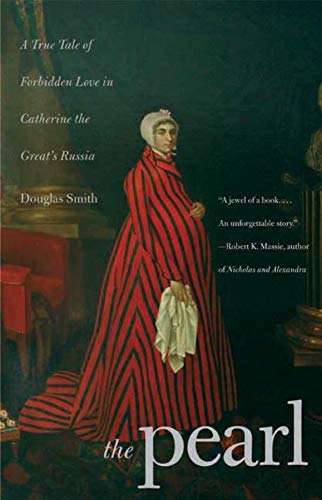 The Pearl
by Douglas Smith

In Stock
$20.99
+10% GST
Presents an account of the illicit love between Count Nicholas Sheremetev (1751-1809), Russia's richest aristocrat, and Praskovia Kovalyova (1768-1803), his serf and the greatest opera diva of her time. This book focuses on the world of the Russian aristocracy, music history, and Russian attitudes toward serfdom.
Very Good
Only 2 left

The Pearl: A True Tale of Forbidden Love in Catherine the Great's Russia by Douglas Smith

The unforgettable story of the serf who became one of Russia's greatest opera singers and her noble master, a man who defied all tradition to marry her

Filled with a remarkable cast of characters and set against the backdrop of imperial Russia, this tale of forbidden romance could be the stuff of a great historical novel. But in fact The Pearl tells a true tale, reconstructed in part from archival documents that have lain untouched for centuries. Douglas Smith presents the most complete and accurate account ever written of the illicit love between Count Nicholas Sheremetev (1751-1809), Russia's richest aristocrat, and Praskovia Kovalyova (1768-1803), his serf and the greatest opera diva of her time.

Blessed with a beautiful voice, Praskovia began her training in Nicholas's operatic company as a young girl. Like all the members of Nicholas's troupe, Praskovia was one of his own serfs. But unlike the others, she utterly captured her master's heart. The book reconstructs Praskovia's stage career as "The Pearl" and the heartbreaking details of her romance with Nicholas-years of torment before their secret marriage, the outrage of the aristocracy when news of the marriage emerged, Praskovia's death only days after delivering a son, and the unyielding despair that followed Nicholas to the end of his life. Written with grace and style, The Pearl sheds light on the world of the Russian aristocracy, music history, and Russian attitudes toward serfdom. But above all, the book tells a haunting story of love against all odds.

"The Pearl is a bright, sparkling jewel of a book; a masterpiece that deserves as wide an audience as possible. Russia's greatest love story has never been properly told, until now." Amanda Foreman, author of Georgiana, Duchess of Devonshire "An engaging narrative... Scrupulous research underlies this fascinating picture of life at Russia's top social echelon." George Loomis, Moscow Times"

Douglas Smith is a resident scholar at the University of Washington and the author of the prize-winning books Working the Rough Stone: Freemasonry and Society in Eighteenth-Century Russia and Love and Conquest: Personal Correspondence of Catherine the Great and Prince Grigory Potemkin.

GOR002657873
The Pearl: A True Tale of Forbidden Love in Catherine the Great's Russia by Douglas Smith
Douglas Smith
Used - Very Good
Paperback
Yale University Press
2009-08-14
352
0300158580
9780300158588
N/A
Book picture is for illustrative purposes only, actual binding, cover or edition may vary.
This is a used book - there is no escaping the fact it has been read by someone else and it will show signs of wear and previous use. Overall we expect it to be in very good condition, but if you are not entirely satisfied please get in touch with us.