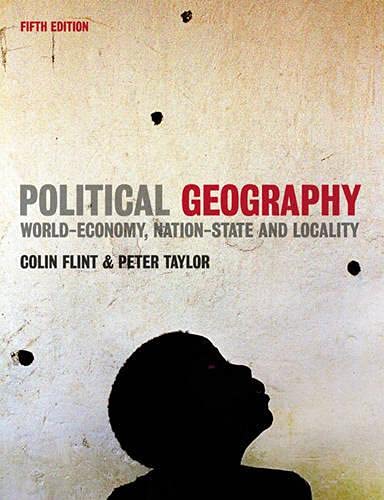 In Stock
$17.49
+10% GST
Offers coverage of and commentary upon the principal events and challenges of world - political violence and terrorism, imperialism, ecological disaster, economic inequity, and exclusionary and fundamentalist attitudes towards nationalism and religion. This title is useful for students of political geography, geopolitics, and others.
Very Good
5 in stock

Political Geography provides a comprehensive understanding of the geo-political landscape. New theories and approaches are blended into established frameworks to the world-systems framework to provide greater understanding of our political world in the twenty first century. In addition, coverage of topical political issues is presented in a clear and accessible format to provide stimulating material for students to engage with.

Tips for reading this book

Preface to the fifth edition

1 A world-systems approach to political geography

Making sense of an age of "Empire"

Dimensions of a historical system

Power and politics in the world-economy

A political geography perspective on the world-economy

What is geopolitics? Past, present and future

The War on Terrorism: Geopolitical transition and world order

Formal imperialism: the creation of empires

The making of the world political map

The nature of the states

Territorial states under conditions of globalization

Synthesis: the power of nationalism

Liberal democracy in the core

Elections beyond the core

A new theory of politics in localities

Localities and the War on Terrorism

Modernity and the politics of identity

Identity politics and the institutions of the capitalist world-economy

Beyond globalization and Empire

GOR002797962
Political Geography: World-economy, Nation-state and Locality by Dr. Colin Flint
Dr. Colin Flint
Used - Very Good
Paperback
Pearson Education (US)
2006-11-24
368
0131960121
9780131960121
N/A
Book picture is for illustrative purposes only, actual binding, cover or edition may vary.
This is a used book - there is no escaping the fact it has been read by someone else and it will show signs of wear and previous use. Overall we expect it to be in very good condition, but if you are not entirely satisfied please get in touch with us.