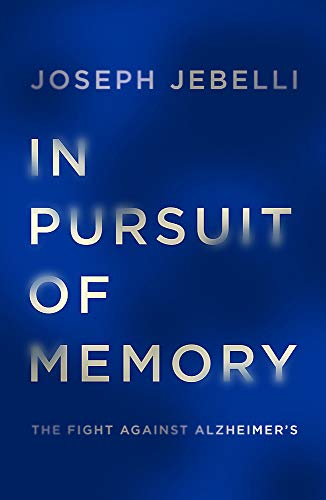 In Pursuit of Memory
by Dr Joseph Jebelli

Used Price
23,49 $
inc. GST
Free Shipping in Australia
The fascinating and very human story of the Alzheimer's epidemic that affects millions of people around the world - and the race against the clock to find a cure.
Reviews:
Trustpilot
Very Good

In Pursuit of Memory Summary

In Pursuit of Memory: The Fight Against Alzheimer's: Shortlisted for the Royal Society Prize by Dr Joseph Jebelli

'When I was twelve, my grandfather began to act strangely. It started with inexplicable walks. He'd leave the dinner table and we would find him, half an hour later, aimlessly wandering around the neighbourhood. His smiles were gradually replaced by a fearful, withdrawn expression; as if he'd lost something irreplaceable. Before long, he didn't recognise any of us.'

Alzheimer's is the great global epidemic of our time, affecting millions worldwide - there are over 850,000 people with the diagnosis in the UK alone. And its shockwaves extend far wider, through disbelieving families and friends. In 2016, it overtook heart disease as the number one cause of death in England and Wales, and as our populations age, scientists are working against the clock to find a cure.

Neuroscientist Joseph Jebelli is among them. Determined to save other families from the experiences that had rocked his, he set out to write the book that explained what happened to his grandfather. Far more than the story of a disease, In Pursuit of Memory zooms inside the human brain to see how Alzheimer's works and out again to show, entwined with the history and science, a thrilling hunt for answers. His quest takes us from nineteenth-century Germany and post-war England, to the jungles of Papua New Guinea and the technological proving grounds of Japan; through America, India, China, Iceland, Sweden and Colombia. Its heroes are scientists from around the world, and the brave patients and families who have changed the way that researchers think about the disease.

Jebelli's compelling insider's account shows vividly why he feels so hopeful about a cure but also why our best defence in the meantime is to understand the disease. In Pursuit of Memory is the definitive book on Alzheimer's: its past, present and future.

Customer Reviews - In Pursuit of Memory

In Pursuit of Memory Reviews

Joseph Jebelli's wonderfully clear, vividly readable and comprehensive survey of the search for a cure . . . The world is closing in on Alzheimer's. There is nowhere left for it to hide * THE TIMES *
A fascinating quest at the frontiers of neuro-degeneration... and a moving, sober and forensic study of the past, present and future of Alzheimer's from the point of view of a neurologist who has lived with the disease, at home and in the lab, from a very young age. The story Jebelli tells illustrates the tantalising mystery of Alzheimer's: it's both highly visible yet agonizingly elusive...a timely analysis [that] might give comfort. -- ROBERT McCRUM * OBSERVER *
A personal story and smart scientific thinking reveal the history and humanity behind an epidemic that affects 44 million people worldwide * NEW SCIENTIST *
A riveting debut... the very human story of the disease that is now an epidemic * BOOKSELLER, SCIENCE BOOK OF THE MONTH *
In Pursuit of Memory is a remarkable combination of fine writing, personal honesty and deep scientific insight - about a devastating and baffling disease that is becoming all too common. Jebelli weighs up all the evidence and all the theories about Alzheimer's and even allows us a glimpse of optimism about a cure * MATT RIDLEY *
An accessible, diligently researched and well-travelled overview of the disease that is more deadly than cancer. Jebelli poignantly weaves the current science with the tragic stories of affected families, not least his own * SUNDAY TIMES *
The definitive portrait of Alzheimer's disease - an illness that is rapidly becoming the defining plague of the 21st century * Big Issue *
On the surface it's about Alzheimer's disease but more than that it demonstrates how challenging it is to understand the brain -- Suzanne O'Sullivan * Observer, BOOKS OF THE YEAR *
An elegant and precise writer, Jebelli follows every lead for a cure with the panache of a detective novelist, giving readers much to hope for despite the devastation Alzheimer's has left in its wake. Based on his meticulous and wide-ranging research, he makes a convincing argument that Alzheimer's will be defeated in the decades to come. Jebelli analyzes every facet of Alzheimer's with personal empathy and scientific rigor, a combination that makes for enthralling reading. * Kirkus, starred review *

Joseph Jebelli is a thirty-year-old British neuroscientist and writer. He began to work on the disease - specifically, using the body's immune system to halt its progress - while studying for his PhD in neurobiology at UCL. He has written for the Guardian and the Wellcome Trust. This is his first book.

GOR008721927
In Pursuit of Memory: The Fight Against Alzheimer's: Shortlisted for the Royal Society Prize by Dr Joseph Jebelli
Dr Joseph Jebelli
Used - Very Good
Paperback
John Murray Press
2017-05-30
320
1473635748
9781473635746
Short-listed for Royal Society Winton Prize for Science Books 2017 (UK)
Book picture is for illustrative purposes only, actual binding, cover or edition may vary.
This is a used book - there is no escaping the fact it has been read by someone else and it will show signs of wear and previous use. Overall we expect it to be in very good condition, but if you are not entirely satisfied please get in touch with us.