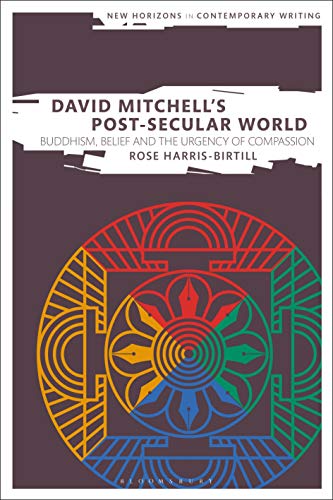 Since the publication of Ghostwritten (1999), David Mitchell has rapidly established himself as one of the most inventive and important British novelists of the 21st century. In this landmark study, Rose Harris-Birtill reveals the extent to which Mitchell has created an interconnected fictional world across the full run of his writing. Covering Mitchell's complete fictions, from bestselling novels such as Cloud Atlas (2004), The Bone Clocks (2014) and number9dream (2001), to his short stories and his libretti for the operas Sunken Garden and Wake, this book examines how Buddhist influences inform the ethical worldview that permeates his writing. Using a comparative theoretical model drawn from the Tibetan mandala to map Mitchell's fictional world, Harris-Birtill positions Mitchell as central to a new generation of post-secular writers who re-examine the vital role of belief in galvanizing action amidst contemporary ecological, political and humanitarian crises. David Mitchell's Post-Secular World features two substantial new interviews with the author, a chronology of his fictions and a selected bibliography of important critical writings on his work.

Rose Harris-Birtill persuasively argues that Mitchell's work--including libretti, short stories, and novels--maps a post-secular metaphysics and expresses a compassionate global ethics. In its comprehensive sweep and incisive arguments, this book sets a standard for Mitchell criticism to date and to come. * Paul A. Harris, Professor of English, Loyola Marymount University, USA *
Highly original in its approach and informed by a deep encyclopedic knowledge of Mitchell's entire oeuvre - including his short stories, libretti, non-fiction and interviews, this is a true eye-opener of a study which skillfully captures the author's design of a cosmopolitan world-system intent upon galvanising compassionate ethical action in his readers. * Professor Berthold Schoene, Professor of English and Faculty Head of Research and Knowledge Exchange for Arts and Humanities, Manchester Metropolitan University *
Mandalic thinking lies at the heart of this ground-breaking literary criticism which marks the start of an inter-connected multi-faceted rendering of life's urgent needs: compassion and ethical action. The zeitgeist of a post-secular age - faced with humanitarian and ecological crises - demands nothing less. * Rosita Dellios, Associate Professor of International Relations Faculty of Society and Design, Bond University, Australia *
In this study, Rose Harris-Birtill offers a persuasive account of the ethical implications of David Mitchell's writing that points towards a different way of mapping contemporary literature's ethical engagement at a time of ongoing crisis. Deftly negotiating previous readings of his oeuvre, Harris-Birtill presents the Tibetan Buddhist mandala as an interpretive framework for tracing real and imagined topographies within Mitchell's novels, short fiction and libretti. In so doing, she offers a compelling reading of Mitchell's works as articulations of a continuous fictional world in which moments of compassionate action reverberate across his texts. * Dr Caroline Edwards, Senior Lecturer in Modern & Contemporary Literature Birkbeck, University of London *
David Mitchell's Post-Secular World is an outstanding work of contemporary scholarship. Harris-Birtill has produced the most rigorous and comprehensive study of Mitchell's work to date. Attentive close reading and supple argument is supported by impeccable and exhaustive research. The use of the mandala as a comparative framework to map Mitchell's storyverse is an entirely original critical and theoretical approach in contemporary literary studies. Its beauty here lies in its dual effectiveness in reconceptualising both the structure of Mitchell's work, and his ethical and philosophical concerns. This book will be the definitive critical work on Mitchell's oeuvre for many years to come, but it is also a crucial contribution to theory and criticism of the post-secular in contemporary literature more widely. * Dr Sarah Dillon, Clare College, University of Cambridge *
In this compellingly argued and smartly written study, Rose Harris-Birtill offers an important new perspective for assessing the work of one of this century's key writers. Unlike previous studies, David Mitchell's Post-Secular World addresses the extensive cross-cultural, cross-temporal narrative world--or macronovel--that Mitchell is still in the process of creating, and it insightfully demonstrates that not only Mitchell's novels but also his short stories and libretti are integral, vitally connected components of this world. Harris-Birtill employs the Tibetan Buddhist mandala for mapping this world-system, thus bringing to light the deeply ethical nature of Mitchell's vision. She concurrently explores the mandala's meaning, appropriation, and deployment in contemporary culture. Harris-Birtill's engaging interviews with Mitchell provide enlightening supplements to the critical analyses. This text should prove an invaluable resource to scholars interested in David Mitchell's fiction and the literature of the twenty-first century, as well as those who wish to understand the mandala's cultural significance. * Dr. Jo Alyson Parker, Professor of English, Saint Joseph's University, USA *

Rose Harris-Birtill is a Post-Doctoral Researcher at the University of St Andrews, UK.

GOR010254499
David Mitchell's Post-Secular World by Dr Rose Harris-Birtill
Dr Rose Harris-Birtill
New Horizons in Contemporary Writing
Used - Very Good
Hardback
Bloomsbury Publishing PLC
2019-01-10
256
135007859X
9781350078598
N/A
Book picture is for illustrative purposes only, actual binding, cover or edition may vary.
This is a used book - there is no escaping the fact it has been read by someone else and it will show signs of wear and previous use. Overall we expect it to be in very good condition, but if you are not entirely satisfied please get in touch with us.