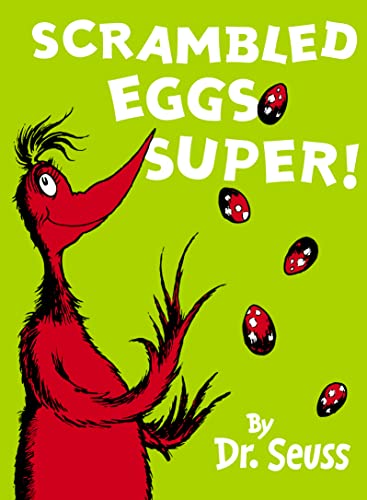 Originally published as part of the Dr. Seuss Miniature Library, this mini hardback is now available on its own.

Originally published as part of the Dr. Seuss Miniature Library, this mini hardback is now available on its own.

The list of ingredients in `Scrambled Eggs Super!' includes eggs of the Stroodel, who's sort of a stork but with fur like a poodle, and of the moth-watching Sneth - a bird who's so big she scares people to death!

GOR002656078
Scrambled Eggs Super! by Dr. Seuss
Dr. Seuss
Used - Very Good
Hardback
HarperCollins Publishers
2006-03-25
64
0007175965
9780007175963
N/A
Book picture is for illustrative purposes only, actual binding, cover or edition may vary.
This is a used book - there is no escaping the fact it has been read by someone else and it will show signs of wear and previous use. Overall we expect it to be in very good condition, but if you are not entirely satisfied please get in touch with us.