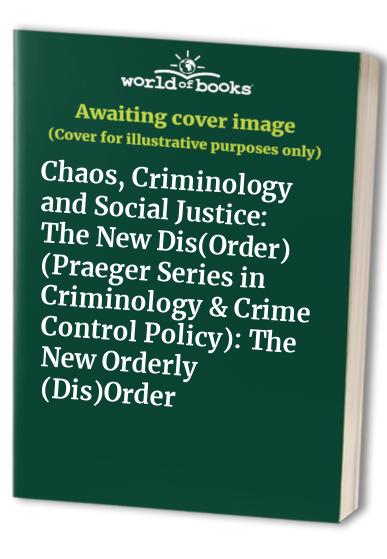 In Stock
$16.49
+10% GST
Chaos theory has challenged the presumption that the cosmos is orderly and linear. Here, key thinkers who have applied chaos theory to criminology, law, and social change, are brought together in one work, which aims to go beyond theory building and explore opportunities for a new just society.
Very Good
Only 1 left

Chaos theory challenges the presumption that the cosmos is orderly, linear, and predictable-but it does not imply pure randomness and chance events. Rather, chaos-informed postmodernist analysis introduces a new vision by celebrating unexpected, surprise, ironic, contradictory, and emergent elements. Scholars in many disciplines are taking this perspective as an alternative to the entrenched structural functionalism and empiricism rooted in linear science. In the early 1990s studies began to emerge applying chaos theory to criminology, law, and social change. This book brings together some of the key thinkers in these areas. Part I situates chaos theory as a constitutive thread in contemporary critical thought in criminology and law. It seeks to provide the reader with a sensitivity to how chaos theory fits within the postmodern perspective and an understanding of its conceptual tools. Part II comprises chapters on applying the chaos perspective to critical criminology and law and, beyond, to peacemaking. Part III presents studies in chaos-informed perspectives on new social movement theory, social change, and the development of social justice. While the book emphasizes the usefulness of the conceptual tools of chaos theory in critical criminology and law, its ultimate goal goes beyond theory-building to provide vistas for understanding the contemporary social scene and for the development of the new just society.

DRAGAN MILOVANOVIC is Professor of Criminal Justice at Northeastern Illinois University. He has authored, coauthored, or edited ten books, including Constitutive Criminology (1996), Postmodern Criminology (1996), The Sociology of Law (1994), and Postmodern Law and Disorder (1992), as well as over one hundred other publications. He was editor of the journal Humanity and Society and coeditor of Critical Criminology and is currently coeditor of the Journal of Human Justice.

Introduction by Dragan Milovanovic Chaos Theory: Conceptual Contributions to a Postmodern Criminology and Law Postmodernist versus the Modernist Paradigm: Conceptual Differences by Dragan Milovanovic Challenges: For a Postmodern Criminology by T. R. Young Chaos, Criminology, and Law: Critical Applications Chaos and Modeling Crime: Quinney's Class, State, and Crime by Allison Forker The ABCs of Crime: Attractors, Bifurcations, and Chaotic Dynamics by T. R. Young Geometric Forms of Violence by Hal Pepinsky Law and Social Change: The Implications of Chaos Theory in Understanding the Role of the American Legal System by Glenna Simons and William F. Stroup, III Chaos, Law, and Critical Legal Studies: Mapping the Terrain by Glenna Simons The Chaotic Law of Forensic Psychology: The Postmodern Case of the (In)Sane Defendant by Bruce Arrigo Chaos Theory, Social Justice, and Social Change Surfing the Chaotic: A Non-Linear Articulation of Social Movement Theory by Robert Schehr Dimensions of Social Justice in an SRO (Single Room Occupancy): Contributions from Chaos Theory, Policy, and Practice by Bruce Arrigo Visions of the Emerging Orderly (Dis)Order by Dragan Milovanovic Index About the Editor and Contributors

GOR003603321
Chaos, Criminology, and Social Justice: The New Orderly (Dis)Order by Dragan Milovanovic
Dragan Milovanovic
Used - Very Good
Paperback
ABC-CLIO
1997-05-30
240
0275959120
9780275959128
N/A
Book picture is for illustrative purposes only, actual binding, cover or edition may vary.
This is a used book - there is no escaping the fact it has been read by someone else and it will show signs of wear and previous use. Overall we expect it to be in very good condition, but if you are not entirely satisfied please get in touch with us.