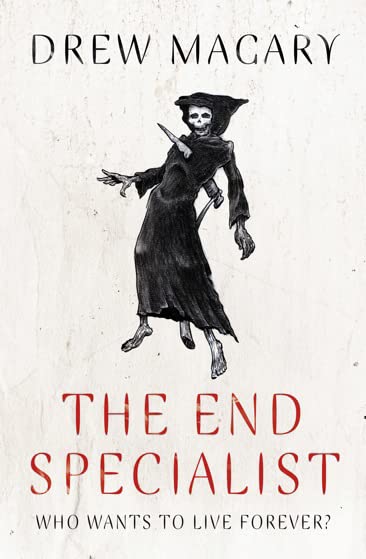 The End Specialist
by Drew Magary

A gripping, compulsive thriller set in a future where the cure for ageing has been discovered... to devastating consequences

The End Specialist by Drew Magary

A gripping, compulsive thriller set in a future where the cure for ageing has been discovered... to devastating consequences

"You got me. I don't want to die. I'm terrified of death. I fear there's nothing beyond it and that this existence is the only one I'll ever possess. That's why I'm here."
(An excerpt from the digital journal of John Farrell, cure age 29)

2019. Humanity has witnessed its greatest scientific breakthrough yet: the cure for ageing. Three injections and you're immortal - not bulletproof or disease-proof but you'll never have to fear death by old age.

For John Farrell, documenting the cataclysmic shifts to life after the cure becomes an obsession. Cure parties, cycle marriages, immortal livestock: the world is revelling in the miracles of eternal youth. But immortality has a sinister side, and when a pro-death terrorist explosion kills his newly-cured best friend, John soon realizes that even in a world without natural death, there is always something to fear.

Now, John must make a new choice: run and hide forever, or stay and fight those who try to make immortal life a living hell.

The e-book edition contains exclusive extra content - for those who want to find out even more consequences of the cure for ageing.

`Drew Magary's haunting first novel imagines a postmodern dystopia that would seem far-fetched if it didn't seem so possible. The End Specialist will make you regret ever wondering, even secretly, what it would be like to live forever'
-Stefan Fatsis, author of Word Freak and A Few Seconds of Panic

`As insanely entertaining as it is ambitious, The End Specialist takes us into an America set in the next few years and coming apart under the onslaught of a dreadful new plague - that of human immortality. Magary possesses an explosive imagination and let loose in The End Specialist, he creates an alternate history of the near future that feels real and is probably inevitable'
-Evan Wright, author of Generation Kill

`This thoughtful novel cleverly explores the consequences of having a long-term lease on life, from the mundane to the profound ... Fascinating'
-Publisher's Weekly

Drew Magary is a writer for Deadspin, NBC, Maxim magazine, and Kissing Suzy Kolber. He's also written for GQ, New York Magazine, ESPN, Yahoo!, Playboy, Penthouse, and various other media outlets. His first book, "Men With Balls," was released in 2008. This is his first novel. He lives in Maryland with his wife and children.

GOR003589885
The End Specialist by Drew Magary
Drew Magary
Used - Very Good
Paperback
HarperCollins Publishers
2011-09-29
400
0007429088
9780007429080
N/A
Book picture is for illustrative purposes only, actual binding, cover or edition may vary.
This is a used book - there is no escaping the fact it has been read by someone else and it will show signs of wear and previous use. Overall we expect it to be in very good condition, but if you are not entirely satisfied please get in touch with us.