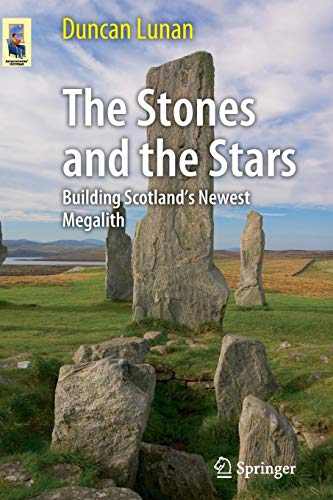 The Stones and the Stars
by Duncan Lunan

In a fascinating and unique account of the construction of Britain's first stone circle for 3000 years, the project's director describes how the astronomically aligned grouping of megaliths came to be Scotland's 49th, and latest, circle of standing stones.

The Stones and the Stars Summary

The Stones and the Stars: Building Scotland's Newest Megalith by Duncan Lunan

There are at least 48 identified prehistoric stone circles in Scotland. In truth, very little is known about the people who erected them, and ultimately about what the stone circles were for. Most stone circles are astronomically aligned, which has led to the modern debate about why the alignment was significant. The megaliths certainly represented an enormous co-operative effort, would at the very least have demonstrated power and wealth, and being set away from any dwellings probably served a ceremonial, or perhaps religious, purpose.

Observations at the site of the stone circles, of solar, lunar, and stellar events, have already cast light on some of the questions about the construction and use of ancient megalithic observatories.

In his capacity as manager of the Parks Department Astronomy Project, author Duncan Lunan designed and built the first astronomically aligned stone circle in Britain in over 3,000 years. 'The Stones and the Stars' examines the case for astronomical alignments of stone circles, and charts the development of a fascinating project with a strong scientific and historical background. The work was documented in detail by the artist and photographer Gavin Roberts, and this archive has been added to since - so an appropriate selection of illustrations will bring the project vividly to life.

Duncan Lunan was born in Edinburgh in 1945 and educated at Marr College, Troon, and at Glasgow University, gaining an M.A. (Honors) in English and Philosophy, with Physics and Astronomy as supporting subjects. He holds a postgraduate Diploma in Education.

He has been President of the Association in Scotland into Astronautics (ASTRA), three times, and has also been Vice President, Secretary and Treasurer at various times during 47 years on the society's Council; he has been on the exhibitions and publications committees since 1970 and was the Assistant Curator of Airdrie Public Observatory 1987-97, again 2003-2008. With his wife Linda, they launched a new organization to support newcomers to astronomy, 'Astronomers of the Future.'

In 1978-79, as Manager of the Glasgow Parks Department Astronomy Project, he designed and built the first megalithic observatory in Britain for 3,000 years; in 1990-91 he was photo archivist for the Press Centre during Glasgow's year as European City of Culture. In 2006-2008 he was manager of the North Lanarkshire Astronomy Project, organizing nearly 700 events including more than 450 school visits, and otherwise has been a full time writer since 1970.

BY THE SAME AUTHOR

Man and the Stars
New Worlds for Old
(Edited) Starfield, science fiction by Scottish writers
(Fiction) With Time Comes Concord and Other Stories
Children from the Sky: a Speculative Treatment of a Mediaeval Mystery
Incoming Asteroid! (book coming next year)

GOR010083968
The Stones and the Stars: Building Scotland's Newest Megalith by Duncan Lunan
Duncan Lunan
Astronomers' Universe
Used - Very Good
Paperback
Springer-Verlag New York Inc.
2012-11-22
325
1461453534
9781461453536
N/A
Book picture is for illustrative purposes only, actual binding, cover or edition may vary.
This is a used book - there is no escaping the fact it has been read by someone else and it will show signs of wear and previous use. Overall we expect it to be in very good condition, but if you are not entirely satisfied please get in touch with us.