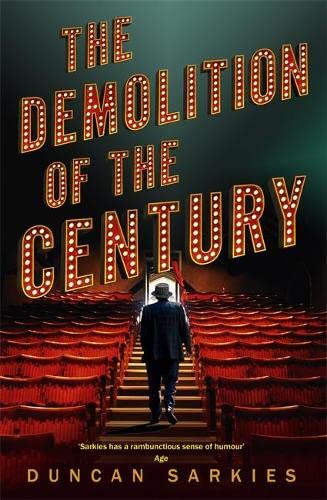 The Demolition of the Century by Duncan Sarkies

The Demolition of the Century by Duncan Sarkies

'Twisted, surprising and very very very funny. Did I put too many verys? I don't think so' Jemaine Clement, Flight of the Conchords, on Two Little Boys

Tom Spotswood (a.k.a. William McGinty) is an insurance investigator who has lost his socks, his suitcase, his career, his ex-wife, and most importantly, his son, Frank.

He is being followed by Robert Valentine, the mysterious owner of the horse with no sperm; Alastair Shook and his van of teenage guards; and Spud, a demolition man who is using his wrecking ball to bring down the most beautiful movie theatre in town, the Century.

The Demolition of the Century appeals to fans of kooky, quirky humour similar to Flight of the Conchords.

Duncan Sarkies has written several plays, film scripts and live shows as well as two novels. He wrote an episode for the HBO TV series Flight of the Conchords and his book of short stories, Stray Thoughts and Nose Bleeds, won Best First Book at the Montana New Zealand Book Awards in 2000. Two Little Boys was released as a feature film in 2012.
GOR005100194
9781848541108
1848541104
The Demolition of the Century by Duncan Sarkies
Duncan Sarkies
Used - Very Good
Paperback
John Murray Press
2013-07-18
400
N/A
Book picture is for illustrative purposes only, actual binding, cover or edition may vary.
This is a used book - there is no escaping the fact it has been read by someone else and it will show signs of wear and previous use. Overall we expect it to be in very good condition, but if you are not entirely satisfied please get in touch with us
Trustpilot