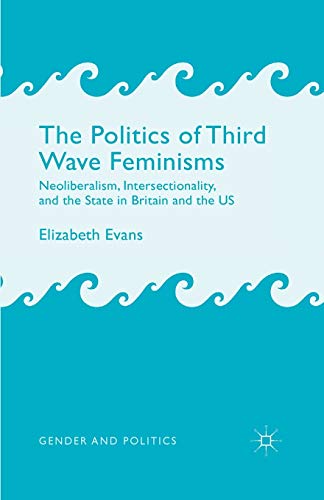 The Politics of Third Wave Feminisms by E. Evans

The Politics of Third Wave Feminisms: Neoliberalism, Intersectionality, and the State in Britain and the US by E. Evans

The past twenty years have witnessed a renewal of interest in feminist activism on both sides of the Atlantic. In part this has been a response to neoliberal and neoconservative attacks, both implicit and explicit, on the gains made by feminists during the 1960s and 70s.

This study adds a comparative dimension to the ongoing analysis of feminism and feminist activism by mapping, analysing and theorising third wave feminisms in the US and Britain.

A key addition to Gender and Politics literature, it explores third wave feminisms by situating them within a specific political context, neoliberalism, and in relation to feminist theories of intersectionality, both of which present radical opportunities and practical challenges for feminism and the feminist movement.

"Elizabeth Evans' The Politics of Third Wave Feminisms: Neoliberalism, Intersectionality, and the State in Britain and the US ... is a practical and well-written book that does what it says on the tin - a rare find within academia." (Finn Mackay, timeshighereducation.com, December, 2015)

"Elizabeth Evans produces a volume that discusses the concept and practice of intersectionality and the impact of neoliberal policies on third wave Feminism in Britain and the US ... . It is accessible, authoritative, engaging, and relevant ... . I would thoroughly recommend it to anyone with a passing interest in Feminism, specialist or otherwise. It works as both a first port of call for anything third wave-related or as a self-contained volume." (Isabel Lopez Ruiz, LSE Review of books, blogs.lse.ac.uk, July, 2105)

'This is an essential book for any feminist, not only in the UK and US. It's deeply informed reflection on what has changed and what remains as the feminism of the 1970s has aged, infiltrated policy-making, become caricatured, faced new forms of resistance is vital for anyone who wishes to transform gender relations. Moreover, Evans takes the internal criticisms that have always been part of feminism seriously, thus generating a valuable new perspective on both complicity with the state and the problematics that commitment to intersectionality raises. Paradoxically, her attention to the differences between US and UK feminisms in the challenges they face, organizational and political resources they hold, and different histories and alliances around race and class issues brings out as well their similarities in the grassroots struggles waged around neoliberal restructuring, cultural individualism, and racial diversity.'

'The Politics of Third Wave Feminisms provides an unprecedented empirically rich and systematic comparison of recent feminist activism in Britain and the US as it is intertwined with the intersectional nature of women's interests. Debunking conventional wisdom about the similarities of anglo-american feminisms, while showing that the concept of the third wave travels, Elizabeth Evans' engaging and powerful analysis will have a lasting appeal to students of feminist studies, comparative politics, and gender and politics alike.'

'Evans' book on US and British Third Wave Feminism deals with every single issue of importance for understanding today's contemporary feminist thought and praxis. Interested in feminism vis-a-vis the current neo-liberalist turn, the backlash against women's rights, and the challenges and opportunities that intersectionality presents for the feminist movement? Read this book!'

"At last! A Feminist academic text that isn't afraid of The P Word - patriarchy. As well as being about politics, this latest publication from Evans is a political book in the true sense, not shying away from difficult issues, nor afraid to explore possibilities for change. A welcome addition for all scholars and activists"

Contents List of Tables Acknowledgements Introduction PART I 1. Understanding the Third Wave 2. Conceptual and Contextual Framework: Neoliberalism and Intersectionality 3. Reclaiming and Rebranding PART II 4. Feminist Inclusivity 5. The Sisterhood: Spaces and Inclusivity PART III 6. Feminism and Women's Political Representation 7. Representing Women's and Feminist Interests 8. Abortion and Reproductive Justice Activism Conclusion Appendix A: Interview schedule Appendix B: Interview guide Bibliography Notes
NGR9781349451814
9781349451814
1349451819
The Politics of Third Wave Feminisms: Neoliberalism, Intersectionality, and the State in Britain and the US by E. Evans
E. Evans
Gender and Politics
New
Paperback
Palgrave Macmillan
2015-01-01
237
N/A
Book picture is for illustrative purposes only, actual binding, cover or edition may vary.
This is a new book - be the first to read this copy. With untouched pages and a perfect binding, your brand new copy is ready to be opened for the first time
Trustpilot