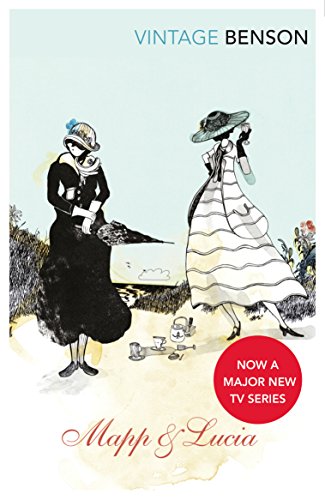 In Stock
$14.49
+10% GST
Look out for the new BBC adaptation starring Anna Chancellor, Miranda Richardson and Mark Gatiss! But Mapp will not relinquish her supremacy in local society so easily, and battle is joined between these two indomitable queens and their rather fickle allies.
Very Good Good Well Read
Only 1 left

Look out for the new BBC adaptation starring Anna Chancellor, Miranda Richardson and Mark Gatiss! Miss Elizabeth Mapp reigns supreme over the village of Tilling...until the advent of Mrs Emmeline Lucas, or 'Lucia' to her friends. No one could compete, surely, with Lucia's formidable armoury: her duchesses, her Italian, her financial speculations, her celebrated recipe for Lobster a la Riseholme. But Mapp will not relinquish her supremacy in local society so easily, and battle is joined between these two indomitable queens and their rather fickle allies.

"No matter how appalling, malicious and pretentious the behaviour of Lucia, the reader is always lured into a sense of affectionate complicity with this comic monster" * Daily Telegraph *
"Bitchily observant novel of small-town life" * Independent *
"Sparkles with wicked wit...provides some pointed digs at social one- upmanship and the genteelly disguised venality of the upper classes. But, on another level, it can be hugely enjoyed as class-war subversion" * Sunday Times *
"The pleasure of Mapp and Lucia is summed up, surely, in Alice Roosevelt's bon mot. "If you have nothing good to say about anybody, come and sit right by me."" -- Philip Hensher
"Oh the joy of seeing Lucia again! These magic books are as fresh as paint. The characters are real and therefore timeless" -- Nancy Mitford * The Times *

Edward Frederic Benson was born on July 24, 1867 in Berkshire, the son of a future Archbishop of Canterbury, and one of six children. He studied at Kings College, Cambridge and at the British School of Archaeology in Athens. Benson's first book, Dodo, was published to popular acclaim in 1893 and was followed by over a hundred books, including novels, histories, biographies and ghost stories. In 1920 Benson became a full-time tenant of Lamb House in Rye, which had once been home to the novelist Henry James. Rye provided the setting for the Mapp and Lucia stories and their author served three terms as mayor of Rye in the late 1930s. E.F. Benson died on February 29, 1940.

GOR002683346
Mapp and Lucia by E. F. Benson
E. F. Benson
Used - Very Good
Paperback
Vintage Publishing
2011-01-06
336
0099528428
9780099528425
N/A
Book picture is for illustrative purposes only, actual binding, cover or edition may vary.
This is a used book - there is no escaping the fact it has been read by someone else and it will show signs of wear and previous use. Overall we expect it to be in very good condition, but if you are not entirely satisfied please get in touch with us.