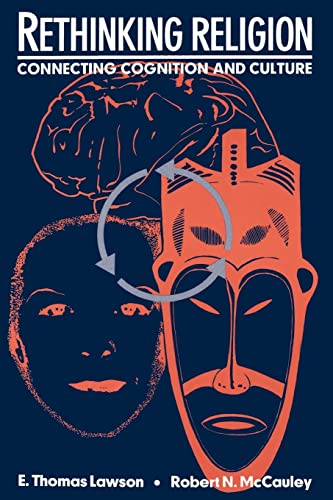 Out of Stock
$88.99
inc. GST
'There is no doubt ... that Rethinking Religion is a very important book that marks a turning point in the way anthropologists think about religious ideas and practices.' Pascal Boyer, American Anthropologist
Very Good
Only 0 left

This book is an ambitious attempt to develop a cognitive approach to religion. Focusing particularly on ritual action, it borrows analytical methods from linguistics and other cognitive sciences. The authors, a philosopher of science and a scholar of comparative religion, provide a lucid critical review of established approaches to religion, and make a strong plea for the combination of interpretation and explanation. Often represented as competitive approaches, they are rather, complementary, equally vital to the study of symbolic systems.

'Lawson and McCauley have done the psychology of religion a service by opening new theoretical and research vistas. Their work merits close study because Rethinking Religion offers a truly creative and different kind of contribution to the field.' Bernard Spika, Contemporary Psychology
'... a very important book that marks a turning point in the way anthropologists think about religious ideas and practices.' Pascal Boyer, American Anthropologist
"[The authors] do a splendid job of demonstrating how such a theory would have interpretive and explanatory capabilities that previous theories have lacked....their analysis truly connects the cognitive and cultural dimensions involved in all religious ritual systems." A. Javier Trevino, Sociological Analysis
"One certainly hopes that this impressive book will set the tone for future discussions of this topic. It provides an important theoretical framework that the anthropology of religion cannot possibly ignore." Pascal Boyer, American Anthropologist
"Lawson and McCauley's Rethinking Religion is a creative and carefully crafted book that both defends a general approach to explaining religious systems and develops in embryo a substantive theory of religious ritual. The book cuts across disciplines in a fruiful way, making contributions to anthropology, cogitive psychology and philosophy as well as religious studies more generally." Harold Kincaid, Annals of Scholarship

GOR010246501
Rethinking Religion: Connecting Cognition and Culture by E. Thomas Lawson (Western Michigan University)
E. Thomas Lawson (Western Michigan University)
Used - Very Good
Paperback
Cambridge University Press
1993-01-14
208
0521438063
9780521438063
N/A
Book picture is for illustrative purposes only, actual binding, cover or edition may vary.
This is a used book - there is no escaping the fact it has been read by someone else and it will show signs of wear and previous use. Overall we expect it to be in very good condition, but if you are not entirely satisfied please get in touch with us.