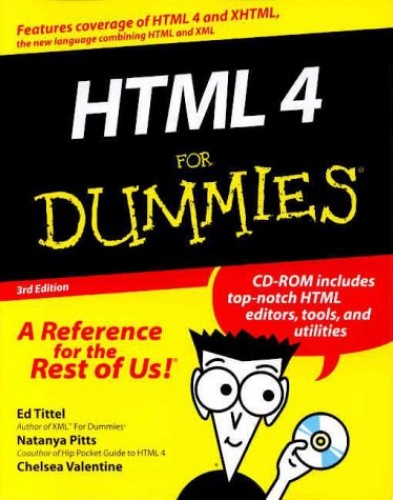 HTML 4 For Dummies by Ed Tittel

This work provides an update to the HTML mark-up standard for amateurs and professional Web designers. It covers HTNL tags and scripting, while also showing how to apply the language to create both simple and complex Web pages.

HTML 4 For Dummies by Ed Tittel

This friendly guide delivers the most recent updates to HTML tags and scripting so you can start publishing Web-savvy documents -- fast! Whether you want to create simple or complex Web pages, these easy-to-follow explanations will help you plan your content and carry your concept through to get the results you want.
Ed Tittel is a grizzled veteran of the publishing game, with several hundred magazine articles and over 85 books to his credit. Ed has worked on five other ...For Dummies books that vary from HTML 4 For Dummies (the fourth iteration on this subject, with Stephen N. James as his coauthor) to Networking with NetWare For Dummies, 4th edition (with James Gaskin and David Johnson), and other topics. Ed also presides over a small Austin, Texas-based consulting company, LANWrights, Inc., that specializes in network-oriented training, writing, and consulting. In his spare time, Ed likes to shoot pool, cook chicken stock, and harass his growing young Labrador pup, Blackie (or is it the other way 'round?). You can reach Ed via e-mail at etittel@lanw.com or on his Web page at lanw.com/etbio.htm.

Natanya Pitts is a writer, trainer, and Web guru in Austin, TX. She has extensive experience in the technical training realm, including overseeing the development of the materials for in-class andWeb-based training offerings. She also helped establish the AustinCommunity College Webmaster Certification program and taught in theprogram for two years.
Natanya has authored, co-authored, orcontributed to more than a dozen Web- and Internet-related titles, including XML For Dummies (1st and 2nd Editions), The XMLBlack Book, and XML In Record Time. Natanya has also taughtclasses on HTML, Dynamic HTML, and XML at several national conferences(including MacWorld, Networld + Interop, and HP World), as well as atthe NASA Ames Research Center.
You can contact Natanya Pitts atnatanya@io.com.

Chelsea Valentine is a full-time trainer, writer, Webmaster...and the list goes on. She has recently worked onthe XML For Dummies, 2nd Edition, and the Hip Pocket Guide forHTML 4.01, both by IDG Books Worldwide. Chelsea spends most of herdays teaching HTML and XML for Austin Community College and in her sparetime, she maintains the LANWrights Web site.
While in college, Chelsea worked for LANWrights, helping out any way she could. Aftergraduating from the University of Texas, Chelsea took off to LatinAmerica and then found her way to Washington, D.C. While working for ahuman rights nonprofit organization, she began working with othernonprofit organizations, teaching them how to get their Web sites up andrunning. Longing for home, she returned to Austin and picked up whereshe left off with LANWrights. Now a full-fledged writer and trainer, shefills almost every waking hour working and playing with HTML code.

GOR001237047
9780764507236
0764507230
HTML 4 For Dummies by Ed Tittel
Ed Tittel
Used - Very Good
Hardback
John Wiley & Sons Inc
2000-06-07
405
N/A
Book picture is for illustrative purposes only, actual binding, cover or edition may vary.
This is a used book - there is no escaping the fact it has been read by someone else and it will show signs of wear and previous use. Overall we expect it to be in very good condition, but if you are not entirely satisfied please get in touch with us
Trustpilot