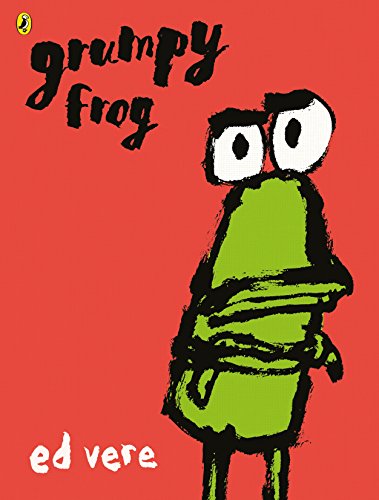 Grumpy Frog is not grumpy. He loves green, and he loves to hop, and he loves winning. But what happens when Grumpy Frog doesn't win, or encounters - horror of horrors - a Pink Rabbit?
Join Grumpy Frog as he learns about compromise and tolerance, friendship and the power of saying sorry.
A hilarious book with a twist in the tail about getting - and getting rid of - the grumps from New York Times best-selling author, Ed Vere.

My favourite yet of Vere's brilliantly irreverent picture books. One young frog loves the colour green, as well as hopping and, of course, winning. But what happens when things don't go to plan? Contrary he may be, but this wonderfully expressive little fellow will have you charmed. Infectiously funny, it's a dream to read aloud, with a positive message about friendship, compromise and saying sorry. And children will adore the snappy twist in the tail. * The Bookseller *
Grumpy Frog is horribly prejudiced against anything that isn't green like him. That, along with his relentless competitiveness, means he isn't much fun to be around, but in the depths of loneliness will he learn compassion and tolerance? It's a scrappy, happy tale * Financial Times *
The hilarious story of a cantankerous creature who loves hoping, winning and the colour green ... Pre-schoolers will roar with laughter at Ed Vere's witty illustrations * Daily Express *
The hilarious tale of a frog who loves hopping, winning and all things green. But what happens when he doesn't win and a pink rabbit offers to be his friend? * Daily Mail Online 'Summer's Hottest Reads' *
A rather neat moral tale that's brilliantly written and illustrated with a kind of frog-like frisson of energy and intensity, as you'd expect from Ed... A fabulous central character narrates his own story, with tons of opportunities for read-aloud fun. Ed has done it again! * Read it, Daddy *
Frog is having "one of those days" and he's not afraid to tell everyone. As long as things are going frog's way, we'll all be ok, but when they aren't, we're all inn for it! This delightfully discombobulated frog has emotional challenges and this book is about learning to deal with them. Despite his disdainful surface demeanour, deep down Frog is nothing but charming, and little readers will be chortling with laughter as they join him in learning how to embrace difference and manage emotions * WRD About Books *
Vere's signature vibrant colours and thick black lines brilliantly accompany the dynamic text, touching on some difficult themes with lightness and zeal... this is a great example of a humorous anthropomorphic picture book working perfectly as a platform to showcase some very serious issues. * Library Mice *
This deftly told story shows how important it is to say sorry, and to compromise - and how that will get rid of the grumps in the best possible way. * Parents in Touch *
A fabulously colourful tale of compromise, tolerance and realising your own shortcomings. It's a story that invites children to acknowledge their own emotions and embrace their own weaknesses. * Picture Books Blogger *
A hilarious book with a twist in the tale about getting, and getting rid of, the grumps, Grumpy Frog subtly teaches the importance of being kind to all. * Parent Talk *
Bestselling author and illustrator Ed Vere is back with a new picture book. Grumpy Frog follows the amphibian as he learns about compromise, friendship and the power of analogy. He may even manage to get rid of his grumpiness! * Baby London *
The hilarious story of a cantankerous creature who loves hoping, winning and the colour green ... Pre-schoolers will roar with laughter at Ed Vere's witty illustrations * Daily Express *

Ed Vere (Author, Illustrator)
Ed Vere is an award-winning and New York Times bestselling writer & illustrator of picture books, including How To Be a Lion and Max the Brave which was named one of The Sunday Times's '100 Modern Children's Classics'.

He studied fine art at Camberwell College of Art and has been writing and illustrating children's books since 1999. Ed's books are published all over the world. He is also a painter, working from his studio in east London, and is represented by galleries in London and Los Angeles.

GOR008310971
Grumpy Frog by Ed Vere
Ed Vere
Used - Very Good
Paperback
Penguin Random House Children's UK
2017-05-04
32
0141370114
9780141370118
N/A
Book picture is for illustrative purposes only, actual binding, cover or edition may vary.
This is a used book - there is no escaping the fact it has been read by someone else and it will show signs of wear and previous use. Overall we expect it to be in very good condition, but if you are not entirely satisfied please get in touch with us.