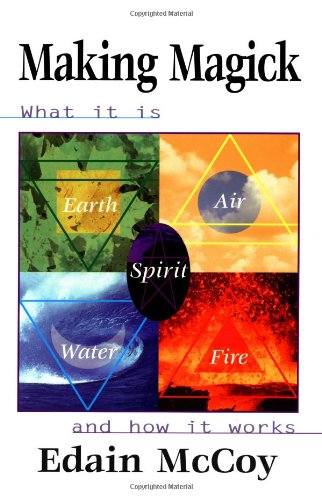 Magick is a positive and active force that is one of the main draws of the various paths of Paganism, turning it into one of the fastest-growing religions in the world today. If you want to become a part of this movement, you need to get "Making Magick" by Edain McCoy.
This book starts with basic theory and technique. You will come to a full understanding of what magick is and how it operates. This is ideal if you are a beginner. Then when you're ready to go further, you'll learn about the traditional tools of the Witch and their uses. Then you'll learn how to design your own rituals and spells.
There are sample spells that you can do right away. But their main purpose is to show you how the design techniques work. You will also be given some basic astrological keys to enhance the timing of your rituals so they can become even stronger.
"Making Magick" goes further than any other book on Wiccan magick. It describes how to use the magickal elements: Air, Earth, Fire, Water, and Spirit. But it also goes deeper. Much deeper. For example, it shows you how you can use astral magick. This is the ability to make changes on the astral plane that result in changes on the physical plane. The powerful tattwa symbols, ancient Hindu keys which can be used for visualization, meditation, and as doorways to the astral plane.
This is a book that Wiccans will be talking about, and using, for years to come.

Edain became a self-initiated Witch in 1981 and has been an active part of the Pagan community since her formal initiation into a large San Antonio coven in 1983. Edain has researched alternative spiritualities since her teens, when she was first introduced to Kaballah, or Jewish mysticism. Since that time, she has studied a variety of magickal paths including Celtic, Appalachian folk magick, and Curanderismo, a Mexican-American folk tradition. Today, Edain is part of the Wittan Irish Pagan tradition, where she is a priestess of Brighid and an elder.
An alumnus of the University of Texas with a BA in history, she is affiliated with several professional writer's organizations and occasionally presents workshops on magickal topics or works individually with students who wish to study Witchcraft.
This former woodwind player for the Lynchburg (VA) Symphony claims both the infamous feuding McCoy family of Kentucky and Sir Roger Williams, the seventeeth-century religious dissenter, as branches on her ethnically diverse family tree. In her "real life," Edain works as a licensed stockbroker.
Edain is the author of fifteen books, including Bewitchments; Enchantments; and her most recent release, Ostara: Customs, Spells & Rituals for the Rites of Spring.

GOR001013235
Making Magick by Edain McCoy
Edain McCoy
Used - Very Good
Paperback
Llewellyn Publications,U.S.
1997-09-30
304
156718670X
9781567186703
N/A
Book picture is for illustrative purposes only, actual binding, cover or edition may vary.
This is a used book - there is no escaping the fact it has been read by someone else and it will show signs of wear and previous use. Overall we expect it to be in very good condition, but if you are not entirely satisfied please get in touch with us.