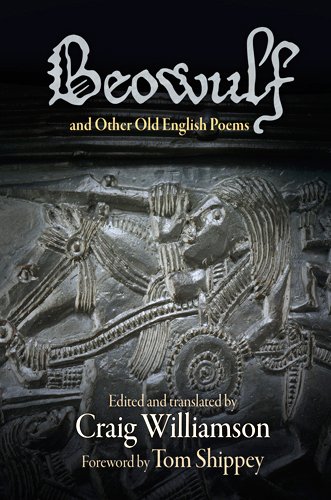 Rarely are these works translated by someone who is both a medieval scholar and a poet, and this combination makes for both fidelity to the complexity of the originals and compelling poetry in a modern idiom.

The best-known literary achievement of Anglo-Saxon England, Beowulf is a poem concerned with monsters and heroes, treasure and transience, feuds and fidelity. Composed sometime between 500 and 1000 C.E. and surviving in a single manuscript, it is at once immediately accessible and forever mysterious. And in Craig Williamson's splendid new version, this often translated work may well have found its most compelling modern English interpreter.

Williamson's Beowulf appears alongside his translations of many of the major works written by Anglo-Saxon poets, including the elegies "The Wanderer" and "The Seafarer," the heroic "Battle of Maldon," the visionary "Dream of the Rood," the mysterious and heart-breaking "Wulf and Eadwacer," and a generous sampling of the Exeter Book riddles. Accompanied by a foreword by noted medievalist Tom Shippey on Anglo-Saxon history, culture, and archaeology, and Williamson's introductions to the individual poems as well as his essay on translating Old English, the texts transport us back to the medieval scriptorium or ancient mead hall to share an exile's lament or herdsman's recounting of the story of the world's creation. From the riddling song of a bawdy onion that moves between kitchen and bedroom, to the thrilling account of Beowulf's battle with a treasure-hoarding dragon, the world becomes a place of rare wonder in Williamson's lines. Were his idiom not so modern, we might almost think the Anglo-Saxon poets had taken up the lyre again and begun to sing after a silence of a thousand years.

"Craig Williamson's Beowulf is superior, both in truth to the original and in readability, to any other version of the poem now available. Surprisingly many modern poets have tried to recreate the old alliterative poetry in modern English, Auden being only the most prominent of them, and while it is quite easy to write alliterative verse, it is hard indeed to do it well. Williamson's translations are very good and very accurate, which is a difficult combination to achieve."-Tom Shippey

"These are modern renderings with bite and muscle, full of chewy sounds to delight any ear or voice, entering the mute reader's eye and resounding within: at times filling a raucous hall, at times gently whispering into an interior fold of woe, of memory. In these resonant spaces we hear again the scop's voice."-Benjamin Bagby, performer of Beowulf and director of the medieval music ensemble Sequentia

"The translation of Beowulf is a notoriously difficult task, and Williamson is to be commended for producing a fluent and lively text that recalls the language of the original to the beginning student of Old English literature."-Comitatus

About Edited and translated by Craig Williamson

Craig Williamson is the Alfred H. and Peggi Bloom Professor of English Literature at Swarthmore College. He is editor and translator of A Feast of Creatures, also available from the University of Pennsylvania Press. Tom Shippey is Professor Emeritus of English at St. Louis University.

OTHER OLD ENGLISH POEMS
A Note on Genres

Heroic or Historical Poems
The Battle of Maldon
Deor

Elegies
The Wanderer
The Seafarer
The Wife's Lament
Wulf and Eadwacer

GOR010735617
"Beowulf" and Other Old English Poems by Edited and translated by Craig Williamson
Edited and translated by Craig Williamson
The Middle Ages Series
Used - Very Good
Hardback
University of Pennsylvania Press
2011-06-30
288
0812243455
9780812243451
N/A
Book picture is for illustrative purposes only, actual binding, cover or edition may vary.
This is a used book - there is no escaping the fact it has been read by someone else and it will show signs of wear and previous use. Overall we expect it to be in very good condition, but if you are not entirely satisfied please get in touch with us.