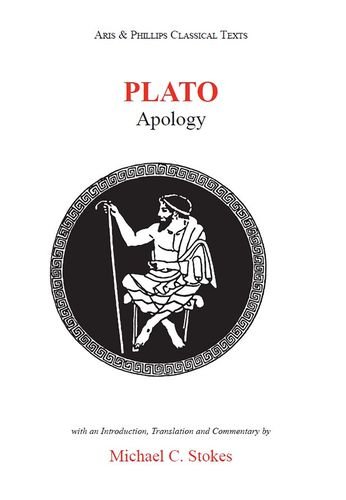 Plato: Apology of Socrates
by Edited and translated by Michael C. Stokes

In Stock
$123.99
inc. GST
The Apology is a masterpiece of rhetoric, illustrating Plato's version of Socrates' dialectical method. This edition brings together valuable research and develops it further, questioning the historical accuracy of Plato's version of Socrates' defence, and presenting the Apology as a work of art. Greek text with translation and commentary.
Very Good
Only 1 left

Plato: Apology of Socrates by Edited and translated by Michael C. Stokes

Plato's Apology (Defence) of Socrates is a masterpiece of ancient rhetoric which philosophically illustrates in practice and illuminates in principle Plato's version of Socrates' dialectical method. This edition aims not merely to present and combine valuable research but to develop it further. The editor is more sceptical than some recent researchers of the historical accuracy of Plato's version of Socrates' defence, and offers an account of the Apology as a work of Plato's own art. [Greek text with facing-page English translation, introduction and commentary.]

About Edited and translated by Michael C. Stokes

Michael Stokes was Emeritus Professor of Greek at the University of Durham, where he held the Chair of Greek from 1974 to 1993. He was formerly Lecturer in Greek at the University of Edinburgh and Associate Professor of Classics at Cornell University. His publications include Dialectic in Action: an Examination of Plato's Crito (Classical Press of Wales, 2005), One and Many in Presocratic Philosophy (Center for Hellenic Studies, 1971) and Plato's Socratic Conversations (Athlone Press & Johns Hopkins University Press, 1986).

Preface
Acknowledgment
INTRODUCTION
I. Bibliographical outlines
II. Relative dating of early treatments of Socrates' trial
III. Sources for Socrates in general
IV. Socrates' daimonion or 'divine sign'
V. The trial of Socrates
(A) The charge (B) The prosecutors (C) The procedures
VI. Some issues in Socratic philosophy
(A) General (B) Wisdom, Knowledge and Ignorance (C) Good and Bad (D) Death (E) A discrepancy with the Crito?
VII. The text of this edition
ABBREVIATIONS
REFERENCES TO PLATO
BIBLIOGRAPHY
GREEK TEXT AND TRANSLATION
COMMENTARY
INDEX

GOR010611947
Plato: Apology of Socrates by Edited and translated by Michael C. Stokes
Edited and translated by Michael C. Stokes
Aris & Phillips Classical Texts
Used - Very Good
Paperback
Liverpool University Press
1997-01-01
208
0856683728
9780856683725
N/A
Book picture is for illustrative purposes only, actual binding, cover or edition may vary.
This is a used book - there is no escaping the fact it has been read by someone else and it will show signs of wear and previous use. Overall we expect it to be in very good condition, but if you are not entirely satisfied please get in touch with us.