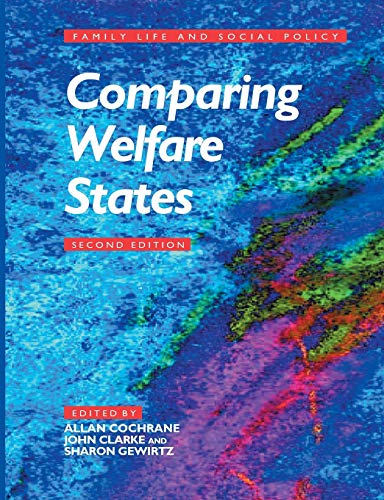 Praise for the First Edition:

`A clear and concise introduction to comparative social policy. It provides students with a framework in which to analyze the British welfare regime and to compare it with those developed and developing elsewhere' - Hilary Graham, Professor of Applied Social Studies, University of Warwick

This extensively revised Second Edition, provides a critical introduction to British and comparative social policy. Drawing on the comparative analysis of welfare regimes, the book show how the welfare systems of individual countries can only be understood thorugh exploring the wider global context. The chapters highlight the richness, complexity and dynamics of welfare regimes in different countries, while ar the same time considering shared features and trends.

Comparing Welfare States provides a unique way into analysis of the British welfare state through its wider international focus. In this extensively revised second edition, the British case is related to the experiences of the United States of America, Sweden, Germany and Ireland, and set in the context of policy issues within the European Union. Througout the authors problematize traditional notions of welfare, emphasizing variations in levels and forms of provision and in the ways in which different social groups experience welfare. Particular attention is paid to the interactions between family policies and issues of race and gender, and to the processes by which indivduals or groups are given or denied access to full welfare citizenship.

This book is an invaluable text for students of British and comparative social and public policy, and to all of those interested in the study of European welfare states.

Praise of the First Edition

`A clear and concise introduction to comparative social policy. It provides students with a framework in which to analyse the British welfare regime and to compare it with those developed and developing elsewhere' - Hilary Graham, Professor of Applied Social Studies, University of Warwick

`This book is well written and presented. It develops current issues in social policy from an historical perspective in a lively and absorbing way. I would recommend it for students taking undergraduate courses, whether conventional courses, or for parts of distance-learning texts' - Social Sciences in Health

GOR010428498
Comparing Welfare States by Edited by Allan Douglas Cochrane
Edited by Allan Douglas Cochrane
Published in Association with The Open University
Used - Like New
Paperback
SAGE Publications Inc
2001-06-04
304
0761970908
9780761970903
N/A
Book picture is for illustrative purposes only, actual binding, cover or edition may vary.
The book has been read, but looks new. The book cover has no visible wear, and the dust jacket is included if applicable. No missing or damaged pages, no tears, possible very minimal creasing, no underlining or highlighting of text, and no writing in the margins.