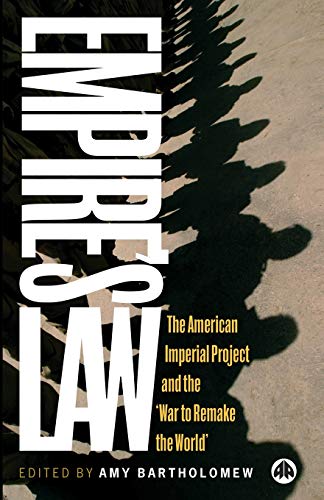 Empire's Law: The American Imperial Project and the 'War to Remake the World' by Edited by Amy Bartholomew

Can democracy and human rights really be imposed 'by fire and sword'?

This is a collection of essays debating empire and international law, concerning the relationship between American imperialism, the abuse of 'humanitarian intervention' and its legal implications.

Covering everything from the role of Europe and the UN, to people's tribunals, to broader accounts of the contradictions of war and human rights, the contributors offer new and innovative ways of examining the problems that we face.

'Right now there can't be enough discussion of America's role in world politics ... This is a much-needed collection from leading scholars' -- Neil Stammers, Senior Lecturer in the Department of International Relations and Politics, University of Sussex
'A first rate essay collection and a 'must read' for students of international law, politics and ethics' -- Jean L. Cohen, Professor of Political Science, Columbia University
'It is extremely relevant ... the coverage is excellent' -- Professor Bob Fine, Director, Social Theory Centre, Warwick University

About Edited by Amy Bartholomew

Amy Bartholomew is an Associate Professor in the Department of Law at Carleton University. She is the editor of Empire's Law: The American Imperial Project and the War to Remake the World (Pluto, 2006). She was an expert witness at the Brussels Tribunal, part of the World Tribunal on Iraq held in April 2004, and on the panel of advocates at the culminating session of the WTI held in Istanbul in June 2005.

Dedication Acknoweldegements Amy Bartholomew: Introduction Part I. The American Imperial Project and the 'War to Remake the World' 1. Leo Panitch and Sam Gindin: Theorising American Empire 2. Jurgen Habermas: Interpreting the Fall of a Monument 3. Ulrich Preuss: The Iraq War - Critical Reflections from 'Old Europe' Part II. Empire's Law: War, Human Rights, and International Law 4. Hans von Sponeck: The Conduct of the UN Before and After the 2003 Invasion 5. Denis Halliday: The UN and its Conduct During the Invasion and Occupation of Iraq 6. Doris E. Buss: Keeping its Promise: Use of Force and the New Man of International Law 7. Trevor Purvis: Looking for Life Signs in an International Rule of Law 8. Peter Swan: American Empire or Empires? Alternative Juridifications of the New World Order 9. Amy Bartholomew: Empire's Law and the Contradictory Politics of Human Rights Part III. Occupation, Democracy and Contradictions of Empire in Iraq 10. Nehal Bhuta: A New Bonapartism? 11. Andrew Arato: Empire's Democracy, Ours and Theirs 12. Haifa Zangana: Three Cyclops of Empire Building: Targeting the Fabric of Iraqi Society Part IV. Resisting Empire: Room for Manoeuvre? 13. Reg Whitaker: Drifting Away from the Edge of Empire: Canada in the Age of George W. Bush 14. David Coates: A 'Just War', or Just another of Tony Blair's Wars? 15. Fuyuki Kurasawa: The Uses and Abuses of Humanitarian Intervention in the Wake of Empire 16. Jayan Nayar: Taking Empire Seriously: Empire's Law, People's Law, and the World Tribunal in Iraq 17. Samir Amin: Whither the United Nations? Index

GOR009697998
Empire's Law: The American Imperial Project and the 'War to Remake the World' by Edited by Amy Bartholomew
Edited by Amy Bartholomew
Used - Very Good
Paperback
Pluto Press
2006-03-20
384
0745323693
9780745323695
N/A
Book picture is for illustrative purposes only, actual binding, cover or edition may vary.
This is a used book - there is no escaping the fact it has been read by someone else and it will show signs of wear and previous use. Overall we expect it to be in very good condition, but if you are not entirely satisfied please get in touch with us.