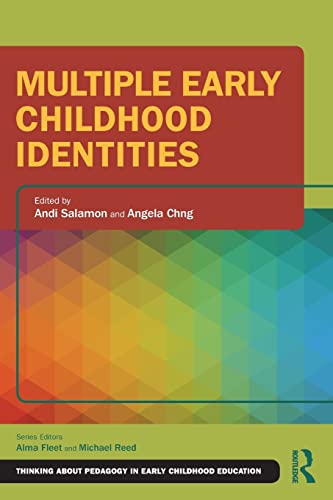 Recognising multiple cultural, ethical and geographical influences which impact on the development of a child's identity, this insightful text explores the role of early childhood practitioners and settings in nurturing and navigating the child's sense of being and belonging.

Multiple Early Childhood Identies confronts the diverse factors which influence early identity-formation to emphasise the child's understanding of self, outsiders' projections and the messages communicated by educators, family members and the wider community as critical to a child's identity and wellbeing. Written to provoke group discussion and extend thinking, this text also provides opportunities for international comparison, points for reflection and editorial provocations and will help students engage critically with the concept of identity-formation and influencing factors. Chapters are divided into four key sections which reflect major influences on practice and pedagogy:

Offering in-depth discussion of the diverse perspectives, experiences and practices which impact on the formation of the child's identity, this text will enhance understanding, support self-directed learning and provoke and transform thinking at both graduate and postgraduate levels, particularly in the field of early childhood education and care, for students, educators, integrated service providers and policy makers.

About the Series Editors and Contributors

SECTION ONE: Being alongside children

Chapter 1: Surviving in a post conflict zone: Through the eyes of young children - Nanditha Hettitantri

Chapter 2: The 'troublemakers': Emerging reflections on the identities of young children living on the streets of Mumbai, India - Zinnia Mevawalla

SECTION TWO: Those who educate

Chapter 4: Interwoven identities in infant and toddler education and care: "What do you think babies will do with clay? Make pots?!" - Tina Stratigos and Andi Salamon

Chapter 8: "You look like a boy": Narratives of gender and implications for early childhood pedagogy - Lorraine Madden

Chapter 10: Exploring constructions of children's identity and childhood in the global South from a policy perspective - Lynn Ang

Chapter 11: Looking back in anger: The impact of domestic violence and abuse on the mother and child relationship - Claire Majella Richards

GOR010236579
Multiple Early Childhood Identities by Edited by Andi Salamon (Australian Catholic University, Australia)
Edited by Andi Salamon (Australian Catholic University, Australia)
Thinking About Pedagogy in Early Childhood Education
Used - Very Good
Paperback
Taylor & Francis Ltd
2019-06-21
212
0367001330
9780367001339
N/A
Book picture is for illustrative purposes only, actual binding, cover or edition may vary.
This is a used book - there is no escaping the fact it has been read by someone else and it will show signs of wear and previous use. Overall we expect it to be in very good condition, but if you are not entirely satisfied please get in touch with us.