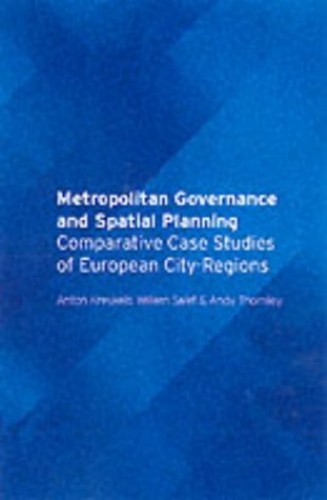 Metropolitan Governance and Spatial Planning
by Edited by Anton Kreukels

In Stock
$48.99
+10% GST
This book explores the relationship between the arrangements for metropolitan decision-making and the co-ordination of spatial policy and compares approaches across a wide range of European Cities.
Very Good
Only 1 left

Metropolitan Governance and Spatial Planning explores the relationship between metropolitan decision-making and strategies to co-ordinate spatial policy. This relationship is examined across 20 cities of Europe and the similarities and differences analysed.
Cities are having to formulate their urban policies in a very complex and turbulent environment. They are faced with numerous new pressures and problems and these often create contradictory conditions. The book provides a theoretical framework for exploring these issues and links this to a detailed investigation of each city.

In the context of globalisation, cities in the last twenty years have experienced new patterns of activity and these usually transcend political boundaries. The management of these changes therefore requires an effort of co-ordination and different cities have found different approaches.
However the institutional setting itself has not remained static. The nation states in Europe have handed over many responsibilities to the European Union while also increasing devolution to regions and cities. Government has therefore become a more complex multi-level activity.
There has also been the move from government to governance. Many different public, quasi-public and private bodies are now involved in making decisions that affect urban development. Metropolitan governance is therefore also a complex multi-actor process.
In these conditions of fragmented governance and the widening spatial networking of urban development, the issue of policy co-ordination become ever more important. The exploration of the 20 cities shows that many face similar difficulties while some also provide interesting examples of innovative practice. The book concludes that the way forward is to find strategies to link the different spheres of metropolitan action through 'organising connectivity'.

About Edited by Anton Kreukels

Andy Thornley is Director of Planning Studies at the London School of Economics and Political Science.Anton Kreukels.>

13. The Prague metropolitan region
14. Metropolitan governance and regional planning in Vienna
15. Venice
16. The region of Milan

22. Practices of Metropolitan Governance in Europe: Experiences and Lessons

GOR009709047
Metropolitan Governance and Spatial Planning: Comparative Case Studies of European City-Regions by Edited by Anton Kreukels
Edited by Anton Kreukels
Used - Very Good
Paperback
Taylor & Francis Ltd
2002-11-14
424
0415274494
9780415274494
N/A
Book picture is for illustrative purposes only, actual binding, cover or edition may vary.
This is a used book - there is no escaping the fact it has been read by someone else and it will show signs of wear and previous use. Overall we expect it to be in very good condition, but if you are not entirely satisfied please get in touch with us.