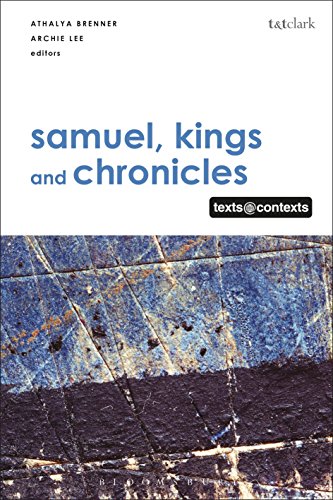 Samuel, Kings and Chronicles I
by Edited by Athalya Brenner-Idan (University of Amsterdam, the Netherlands)

Samuel, Kings and Chronicles I Summary

Samuel, Kings and Chronicles I: Texts @ Contexts by Edited by Athalya Brenner-Idan (University of Amsterdam, the Netherlands)

In this volume scholarly voices from diverse contexts and social locations are gathered together to bring new or unfamiliar facets of biblical texts to light, focusing on issues of intertextuality. Samuel, Kings and Chronicles I sheds light from new perspectives on themes in these so-called historical books including Asian American and Chinese readings, issues of land, genealogy and maleness. The authors challenge us to consider how we deal with cultural distances between ourselves and these ancient writings - and between one another in the contemporary world. These goal of these essays is de-centre the often homogeneous first-world orientation of much biblical scholarship and open to up new possibilities for discovery of meaning and method.

Samuel, Kings and Chronicles I Reviews

This latest contribution to an established series continues to be attentive both to the contexts of biblical texts and to the contexts of biblical interpreters. * Journal for the Study of the Old Testament *
An exciting collection of thoughtful, cutting-edge scholarship ... For the academically-minded minister, it presents a stimulating collection of decentred readings of familiar passages. * Regent's Reviews *
All the essays are interesting and several quite arresting. * The Expository Times *

About Edited by Athalya Brenner-Idan (University of Amsterdam, the Netherlands)

Athalya Brenner-Idan is Professor Emerita of the HB\OT Chair at the Universiteit van Amsterdam, The Netherlands; and currently Professor in Biblical Studies at the Department of Hebrew Culture Studies, Tel Aviv University, Israel. Archie CC Lee is Professor in the College of Divinity at the Chinese University of Hong Kong, Hong Kong.