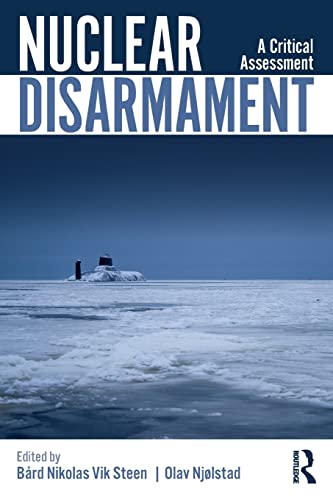 This volume, Nuclear Disarmament, provides a comprehensive overview of nuclear disarmament and a critical assessment of the way forward.

Comprising essays by leading scholars on nuclear disarmament, the book highlights arguments in favour and against a world without nuclear weapons (global zero). In doing so, it proposes a new baseline from which an everchanging nuclear arms control and disarmament agenda can be assessed. Numerous paths to nuclear disarmament have been proposed and scrutinized, and with an increasing number of countries signing off on the Treaty on the Prohibition of Nuclear Weapons, it is vital to ask which path is the most likely and realistic to succeed. The chapters here also address the rapid pace of technological, political and climatic developments, in relation to nuclear disarmament, and how they add to the complexity of the issue. Taking care to unite the different tribes in the debate, this book provides a community of dissent at a time when academic tribalism all too often prevents genuine debates from taking place.

This book will be of interest to students of nuclear proliferation, arms control, security studies and International Relations.

'In 1924 Winston Churchill wrote, "Might not a bomb no bigger than an orange be found to possess a secret power...and blast a township at a stroke" - that bomb was developed and used two decades later and we have been debating its dangers and value and trying to control it ever since - Nuclear Disarmament: A Critical Assessment captures the wide-ranging views of this debate as it stands now almost one hundred years later. Join the debate - the next one hundred years depends on it.'-- William J. Perry, 19th US Secretary of Defense

'A balanced and thoughtful assessment, by a diverse set of global experts, on the pros and cons of nuclear disarmament. Must reading for these challenging times.'--Scott D. Sagan, Stanford University, USA

'As nuclear risks remain unnecessarily and unacceptably high, the Norwegian Nobel Institute deserves our applause for engaging this timely and important discussion. These thought-provoking essays from nuclear experts with different perspectives is a valuable contribution to addressing one of the great strategic challenges of our time.'--former US Senator Sam Nunn, co-Chairman of the Nuclear Threat Initiative

'At a moment when the global arms regime is under pressure, Nuclear Disarmament: A Critical Assessment is a thoughtful compilation from from Steen and Njolstad.' - Henry Kissinger, 56th US Secretary of State

Section II: What happens to strategic stability and deterrence at low numbers?

3. Why Nuclear Disarmament and Strategic Stability Are Incompatible Keir A. Lieber and Daryl G. Press

4. Nuclear weapons as a wicked problem in a complex world Patricia M. Lewis

Section III: Is a Ban a credible path to Global Zero?

6. Decreeing abolition? The pitfalls of a treaty-based approach for getting to zero James M. Acton

Section IV: What can the incremental approach to nuclear disarmament deliver?

8. What can the incremental approach to nuclear disarmament deliver? Angela Kane

Section VI: Technology and nuclear weapons - are we asking the wrong questions?

Section VII: Will the Current Regimes Remain Fit for Purpose?

13.Dim Hope for Disarmament and Approaching Risk of Build Up Wu Riqiang

14. Forecasting Nuclear Disarmament: Can the NPT Get Us to the Finish Line? William C. Potter

Section VIII: Where are we heading? Radical departures from the status quo

15. Radical departures from the status quo and their impacts on Nuclear non-proliferation and disarmament: Positive and Negative Philip E. Coyle

16. How Will the Nuclear 21st Century End? Bruno Tertrais