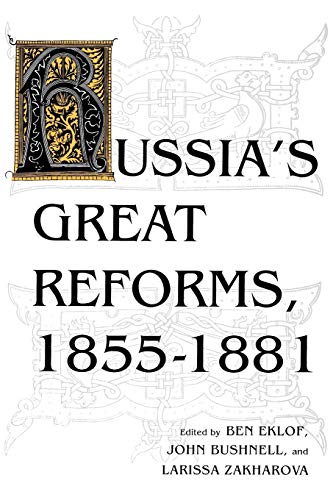 Out of Stock
$24.49
inc. GST
The Great Reforms undertaken during the reign of Alexander I represented a unique attempt by the tsarist government to restructure virtually every aspect of Russian life. This book presents a comprehensive analysis of nineteenth-century Russia's attempt at peaceful reforms.
Very Good
Only 0 left

[The book] succeeds remarkably in providing a multifaceted, yet interconnected, analysis of this signal era of modern Russian history and it is heartily recommended." -The Historian

This volume, the work of an international group of scholars that includes historians from Russia, maps out the major landmarks in the conceptualization and implementation of the Great Reforms during the reign of Alexander II and proposes a variety of perspectives from which to view them.

"[The book] succeeds remarkably in providing a multifaceted, yet interconnected, analysis of this signal era of modern Russian history and it is heartily recommended." The Historian

About Edited by Ben Eklof

I. The Great Reforms and the Historians since Stalin: Abbott Gleason

Part I State and Reform

II. Autocracy and the Reforms of 1861-1874 in Russia: Choosing Paths of Development
Larissa Zakharova: Translated by Daniel Field

IV. Interest-Group Politics in the Era of the Great Reforms
Alfred J. Rieber

V. The Meaning of the Great Reforms in Russian Economic History
Peter Gatrell

IX. Accountable Only to God and the Senate: Peace Mediators and the Great Reforms
Natalia F. Ust'iantseva: Translated by Ben Eklof

X. Municipal Self-Government after the 1870 Reform
Valeriia A. Nardova: Translated by Lori A. Citti

XI. Crowning the Edifice: The Zemstvo, Local Self-Government, and the Constitutional Movement, 1864-1881
Fedor A. Petrow

XIV. The University Statute of 1863: A Reconsidertion
Samuel D. Kassow

XV. The Rise of Voluntary Associations during the Great Reforms: The Case of Charity
Adele Lindenmeyr

GOR005616206
Russia's Great Reforms, 1855-1881 by Edited by Ben Eklof
Edited by Ben Eklof
Indiana-Michigan Series in Russian and East European Studies
Used - Very Good
Paperback
Indiana University Press
1994-06-01
320
0253208610
9780253208613
N/A
Book picture is for illustrative purposes only, actual binding, cover or edition may vary.
This is a used book - there is no escaping the fact it has been read by someone else and it will show signs of wear and previous use. Overall we expect it to be in very good condition, but if you are not entirely satisfied please get in touch with us.