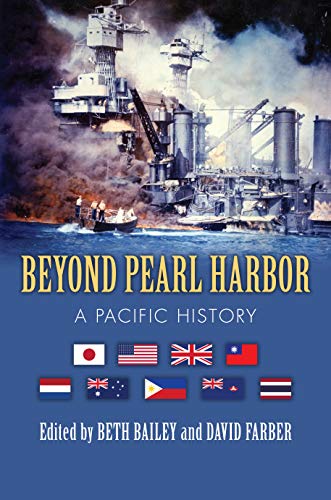 Beyond Pearl Harbor
by Edited by Beth Bailey

In Stock
$35.99
+10% GST
Scholars hailing from four continents and representing six nations reinterpret the meaning of the coordinated, and devastating, attacks of December 7/8, 1941. Working from a variety of angles, they revise and expand, to an unprecedented extent, what we understand about these events.
Very Good
Only 1 left

Beyond Pearl Harbor: A Pacific History by Edited by Beth Bailey

In the United States, December 7, 1941, may live in infamy, in President Franklin D. Roosevelt's phrase, but for most Americans the date's significance begins and ends with the attack on Pearl Harbor. On December 8 (December 7 on the other side of the International Date Line) Japanese military forces hit eight major targets, all but one on western colonial possessions and military outposts in the Pacific: Kota Bharu on the northeast coast of Malaya (now Malaysia); Thailand, the one site not claimed by a western power; Pearl Harbor, O'ahu; Singapore, key to the defense of Britain's Asian empire; Guam, the only island in the Mariana chain not controlled by Japan; Wake Island; Hong Kong; and the Philippines. Told from multiple perspectives, the stories of these attacks reveal the arc of imperialism, colonialism, and burgeoning nationalism in the Pacific world.

In Beyond Pearl Harbor renowned scholars hailing from four continents and representing six nations reinterpret the meaning of the coordinated, and devastating, attacks of December 7/8, 1941. Working from a variety of angles, they revise and expand, to an unprecedented Extent, what we understand about these events-in particular, how Japan's overwhelming, if short-lived, victories contributed to emerging solidarities and nationalist identities within and across Pacific societies. In their essays we see how various elite actors incorporated the attacks into new regimes of knowledge and expertise that challenged and displaced existing hierarchies. Extending far beyond Pearl Harbor, the events of December 1941, as we see in this volume, are part of a story of clashing empires and anti-colonial visions-a story whose outcome, even now, remains to be seen.

Initial American reaction to the Pearl Harbor attack emphasized surprise and the failure of military intelligence. Pearl Harbor has become a symbol of American national unity in the face of external threat. The Japanese see the attack as the beginning of the end, the inescapable path toward atomic destruction and a new world order. Beyond Pearl Harbor reveals a world of different understandings beyond these. Chinese, Indonesian, Filipino, Australian, and transnational understandings point to a clash of empires rather than a binary national conflict. The authors bring to the foreground long-effaced narratives and suggest a much needed postcolonial perspective." - Michael Myers, author of The Pacific War and Contingent Victory: Why Japanese Defeat Was Not Inevitable

"Bailey and Farber have gathered a collection of insightful, original essays that deepen and broaden our understanding of the impact of the Japanese attacks on December 7, 1941. Standard interpretations focus almost exclusively on the destruction at Pearl Harbor. Collectively these essays challenge that narrative and offer a refreshing new perspective that will change forever the way future historians think about that infamous day. This is a bold, imaginative, and absolutely essential book." - Steven M. Gillon, author of Pearl Harbor: FDR Leads the Nation into War

About Edited by Beth Bailey

Beth Bailey is Foundation Distinguished Professor, University of Kansas, and is the author most recently of America's Army: Making the All-Volunteer Force.

David Farber is Roy A. Roberts Distinguished Professor, University of Kansas, and the author of The Rise and Fall of Modern American Conservatism.

GOR010094723
Beyond Pearl Harbor: A Pacific History by Edited by Beth Bailey
Edited by Beth Bailey
Used - Very Good
Paperback
University Press of Kansas
2019-08-30
224
0700628134
9780700628131
N/A
Book picture is for illustrative purposes only, actual binding, cover or edition may vary.
This is a used book - there is no escaping the fact it has been read by someone else and it will show signs of wear and previous use. Overall we expect it to be in very good condition, but if you are not entirely satisfied please get in touch with us.