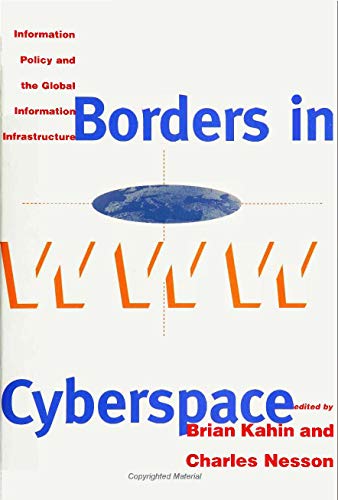 Borders in Cyberspace
by Edited by Brian Kahin (University Of Michigan)

In Stock
$16.99
+10% GST
Investigates issues arising from national differences in law, public policy and cultural values as these differences are reformulated in global information infrastructure. The text considers the issues of intellectual property, security, privacy and censorship.
Very Good
Only 1 left

Borders in Cyberspace: Information Policy and the Global Information Infrastructure by Edited by Brian Kahin (University Of Michigan)

Today millions of technologically empowered individuals are able to participate freely in international transactions and enterprises, social and economic. These activities are governed by national and local laws designed for simpler times and now challenged by a new technological and market environment as well as by the practicalities and politics of enforcement across national boundaries. Borders in Cyberspace investigates issues arising from national differences in law, public policy, and social and cultural values as these differences are reformulated in the emerging global information infrastructure. The contributions include detailed analyses of some of the most visible issues, including intellectual property, security, privacy, and censorship.

"[This] book is a serious attempt to peer beyond today's conflictsto consider how best law may be applied to cyberspace, nationally andinternationally." New Scientist

About Edited by Brian Kahin (University Of Michigan)

Brian Kahin is Senior Fellow at the Computer & Communications Industry Association in Washington, DC. He is also Research Investigator and Adjunct Professor at the University of Michigan School of Information and a special advisor to the Provost's Office. He is a coeditor of Transforming Enterprise (MIT Press, 2004) and many other books.

GOR003214230
Borders in Cyberspace: Information Policy and the Global Information Infrastructure by Edited by Brian Kahin (University Of Michigan)
Edited by Brian Kahin (University Of Michigan)
Borders in Cyberspace
Used - Very Good
Paperback
MIT Press Ltd
1997-02-06
386
0262611260
9780262611268
N/A
Book picture is for illustrative purposes only, actual binding, cover or edition may vary.
This is a used book - there is no escaping the fact it has been read by someone else and it will show signs of wear and previous use. Overall we expect it to be in very good condition, but if you are not entirely satisfied please get in touch with us.