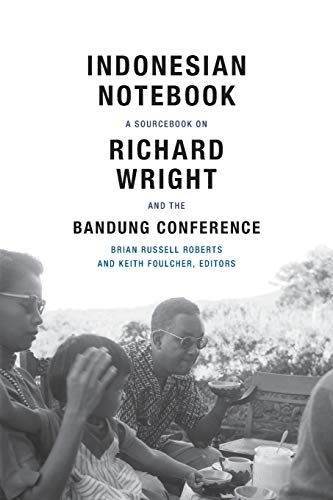 Out of Stock
$42.99
inc. GST
Indonesian Notebook contains myriad documents by Indonesian writers, intellectuals, and reporters that provide the largely absent Indonesian perspectives of the 1955 Bandung Conference and of Richard Wright's activities there, adding new depths to the understandings of the conference. It also includes a newly discovered lecture by Wright.
Very Good
Only 0 left

Indonesian Notebook: A Sourcebook on Richard Wright and the Bandung Conference by Edited by Brian Russell Roberts

While Richard Wright's account of the 1955 Bandung Conference has been key to shaping Afro-Asian historical narratives, Indonesian accounts of Wright and his conference attendance have been largely overlooked. Indonesian Notebook contains myriad documents by Indonesian writers, intellectuals, and reporters, as well as a newly recovered lecture by Wright, previously published only in Indonesian. Brian Russell Roberts and Keith Foulcher introduce and contextualize these documents with extensive background information and analysis, showcasing the heterogeneity of postcolonial modernity and underscoring the need to consider non-English language perspectives in transnational cultural exchanges. This collection of primary sources and scholarly histories is a crucial companion volume to Wright'sThe Color Curtain.

"Indonesian Notebook fills out the broader picture of Wright and the conference. It performs a valuable service ... and should encourage further scholarly digging in locales and languages affected by the conference." -- Jason Parker * Journal of American History *
"In U.S. histories, the meanings of the term the Third World is often rendered as stable. Non-American actors, too, sometimes remain only a spectral presence. By insisting that Indonesian intellectuals and Wright co-produced a different kind of Bandung spirit, Indonesian Notebook instead underscores the contingencies of what one historian rightly calls "the complex and uneven geographies of the postcolonial cold war world." In doing so it can help us begin to reimagine the politics, and the poetics, of the Third World." -- Mark Philip Bradley * Modern American History *
"Rigorously researched and beautifully composed." -- Taomo Zhou * Southeast Asian Studies *

About Edited by Brian Russell Roberts

Brian Russell Roberts is Associate Professor of English at Brigham Young University and the author of Artistic Ambassadors: Literary and International Representation of the New Negro Era. Keith Foulcher is Honorary Associate in the Department of Indonesian Studies at the University of Sydney and the coeditor of Clearing a Space: Postcolonial Readings of Modern Indonesian Literature.

GOR010243758
Indonesian Notebook: A Sourcebook on Richard Wright and the Bandung Conference by Edited by Brian Russell Roberts
Edited by Brian Russell Roberts
Used - Very Good
Paperback
Duke University Press
2016-03-21
288
0822360667
9780822360667
N/A
Book picture is for illustrative purposes only, actual binding, cover or edition may vary.
This is a used book - there is no escaping the fact it has been read by someone else and it will show signs of wear and previous use. Overall we expect it to be in very good condition, but if you are not entirely satisfied please get in touch with us.