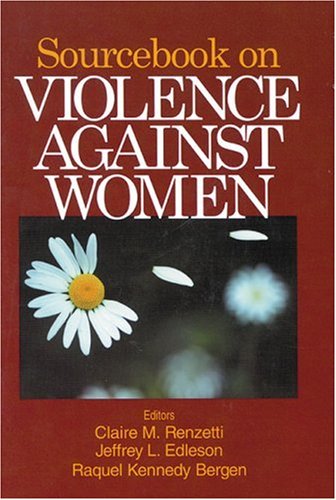 Sourcebook on Violence Against Women
by Edited by Claire M. Renzetti

This textbook comprises a collection of original scholarly writings extensively coving current research on violence against women. It is an excellent resource for students, practitioners, and academics.

Sourcebook on Violence Against Women Summary

Sourcebook on Violence Against Women by Edited by Claire M. Renzetti

Violence against women is a centuries old problem, but it is not until the past three decades that the topic has mushroomed in scholarly discussion. With this explosion of information there is a need for a comprehensive analysis of the complex theoretical, methodological, and ethical issues surrounding this topic.

Editors Claire Renzetti, Jeffrey Edleson, and Raquel Kennedy Bergen fill this void in their book the Sourcebook on Violence Against Women. This handbook comprises a collection of original scholarly writings that extensively cover the current research on violence against women. In four sections the editors treat theoretical and methodological issues in research, types of violence, prevention and direct intervention, and continuing and emerging issues.

As a comprehensive information source on violence against women, this book is an excellent resource for students, practitioners, and academics.

About Edited by Claire M. Renzetti

Claire M. Renzetti, PhD, is the Judi Conway Patton Endowed Chair in the Center for Research on Violence Against Women, and Professor and Chair of the Sociology Department at the University of Kentucky. She is editor of the international, interdisciplinary journal, Violence Against Women; co-editor with Jeffrey Edleson of the Interpersonal Violence book series for Oxford University Press; and editor of the Gender and Justice book series for University of California Press. She has authored or edited 25 books as well as numerous book chapters and articles in professional journals. Much of her research has focused on the violent victimization experiences of socially and economically marginalized women. Her current research includes studies examining the relationship between religiosity and intimate partner violence perpetration, an evaluation of a horticultural therapy program at a shelter for battered women, and a study of potential jurors' prototypes of sex trafficking victims and perpetrators. She has held elected and appointed leadership positions in national and regional professional organizations, and has been honored with awards for her work to improve the quality of life and the health and safety of women. Jeffrey L. Edleson, PhD, is Dean and Professor at the University of California, Berkeley, School of Social Welfare. He is Professor Emeritus in the University of Minnesota School of Social Work and founding director of the Minnesota Center Against Violence and Abuse. He has published more than 130 articles and 12 books on domestic violence, group work, and program evaluation. Edleson recently served on the US National Advisory Council on Violence Against Women and is a Fellow of the American Academy of Social Work and Social Welfare. Raquel Kennedy Bergen is a Professor of Sociology at Saint Joseph's University in Philadelphia, Pennsylvania. She received her BS from Saint Joseph's University in Sociology and her Ph.D. in Sociology from the University of Pennsylvania. She is the author or co-author of numerous scholarly publications and nine books on violence against women including, Wife Rape: Understanding the Response of Survivors and Service Providers; and Issues in Intimate Violence. With Claire Renzetti and Jeff Edleson she edited, Sourcebook on Violence Against Women and Violence Against Women: Classic Statements. She co-edited Violence Against Women: Readings from Social Problems with Claire Renzetti. She is the current Chair of Gender Studies at Saint Joseph's and the faculty moderator for the Rape Education Prevention Program. Her area of expertise is sexual violence in intimate partnerships and she regularly provides workshops around the country to domestic violence and rape crisis programs to address this form of violence. She has volunteered as an advocate for battered women and sexual assault survivors for the past 27 years. Her current research continues in the field of violence against women-analyzing the intersection of women's experiences of physical, sexual and emotional violence with their partners during pregnancy.

GOR007072771
Sourcebook on Violence Against Women by Edited by Claire M. Renzetti
Edited by Claire M. Renzetti
Used - Very Good
Paperback
SAGE Publications Inc
2001-02-02
552
0761920056
9780761920052
N/A
Book picture is for illustrative purposes only, actual binding, cover or edition may vary.
This is a used book - there is no escaping the fact it has been read by someone else and it will show signs of wear and previous use. Overall we expect it to be in very good condition, but if you are not entirely satisfied please get in touch with us.