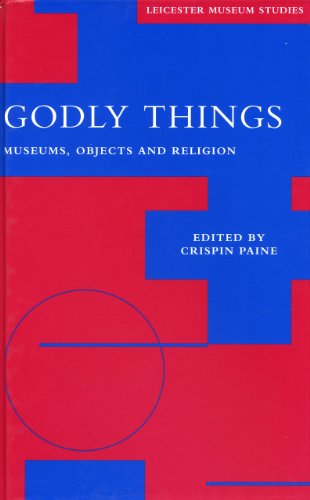 Out of Stock
$155.99
inc. GST
Though museums and galleries are often compared in function to shrines or temples, religion itself is often largely ignored there. However, contemporary appreciation of non-Western religions may change this. The contributors to this volume explore how museums handle and present religious material.
Like New
Only 0 left

Though museums and art galleries are often compared in role and function to shrines or temples, religion itself is often largely ignored. However, contemporary appreciation of non-Western religions may change this as the cultural heritage of hitherto marginalized peoples is given more serious attention. The contributors to this volume explore how museums handle and present religious material. The first three chapters look, from different perspectives, at the principal themes and techniques involved; these are followed by a series of chapters looking at the treatment of religions from Methodism to Voudou in museums from Belfast to Taiwan.

"An exciting contribution to the analysis and interpretation of the will to collect religious artifacts; the historical techniques deployed in its exercise; and the ambiguous role of museums both as sites of colonial and imperial power and as helpful catalysts in the processes of cross-cultural conversation."
- Religious Studies Review, April 2001

About Edited by Crispin Paine

Crispin Paine is the director of Gilbert White's House in Selborne

Exhibiting the sacred; at play in the fields of meaning - reflections on field research; (not) religion in museums; religion, ethnicity and the human condition - a view from a Northern Ireland museum; mounting controversy - the sacred arts of Haitian Voudou; present Buddhism in museums; museums of dissent; presenting Judaism - Jewish museums in Britain; religion by design; religion in London's museums; churches and chapels on open-air museum sites; the Catharijneconvent Museum in Utrecht; the conservation of sacred objects; religion and "the heritage" in Britain.

GOR010426348
Godly Things: Museums, Objects and Religion by Edited by Crispin Paine
Edited by Crispin Paine
Leicester Museum Studies S.
Used - Like New
Hardback
Bloomsbury Publishing PLC
1999-11-25
256
0718501535
9780718501532
N/A
Book picture is for illustrative purposes only, actual binding, cover or edition may vary.
The book has been read, but looks new. The book cover has no visible wear, and the dust jacket is included if applicable. No missing or damaged pages, no tears, possible very minimal creasing, no underlining or highlighting of text, and no writing in the margins.