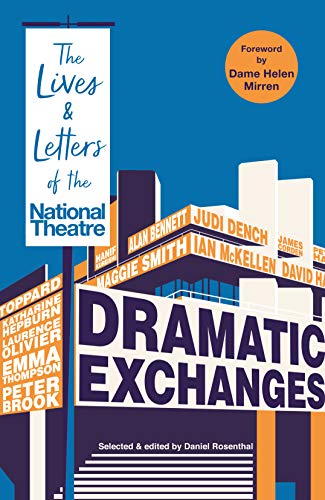 In Stock
$25.99
inc. GST
A unique collection of correspondence between the most celebrated actors, directors and playwrights of the past 50 years
Very Good
Only 3 left

Dramatic Exchanges: Letters of the National Theatre by Edited by Daniel Rosenthal

There has been always as much drama offstage as on at the National Theatre, and much of it is to be found in the letters, telegrams, scribbled notes and colourful postcards of its main players. - What drove Laurence Olivier to confess: 'The foolishness of my position starts to obsess me'? - Why did Maggie Smith write: 'I am absolutely heartbroken by your decision'? - What prompted Judi Dench to ask: 'Can't you write me a musical so that I can sit on a chair in a fur hat & nothing else and sing RUDE songs?' This book brings together for the first time eight hundred of the most inspiring, dramatic and amusing letters from the life of Britain's most beloved theatre: from Laurence Olivier's gracious rejection letters to Peter Hall's combative memos; from Helen Mirren's impassioned defence of theatrical innovation to a Tory politician's brutal telegram damning a play; from fantastical good luck missives to long conspiratorial letters. Together, they reveal the stories behind some of the most lavish, triumphant, daring and disastrous productions in the theatre's history, including Amadeus, Romans in Britain, Laurence Olivier's Othello, Closer, The History Boys and The Curious Incident of the Dog in the Night-Time. A rich collection of correspondence like no other, this book offers a fascinating and celebratory look at the world of theatre and beyond.

Brilliantly evokes the day-to-day life of a great theatre ... The genius of Rosenthal's book, which is both a revelation and a celebration, is to tell this story in the participants' words ... The presence of rarely heard voices is a great strength of the book ... The life-changing power of letters. -- Simon Callow * Guardian *
The best book on the performing arts to have been published in years. * Daily Mail *
Vivid and dramatic ... whisks through the personnel and the plays with brio, well-judged illustrations and incisive editing ... revelatory and engrossing -- Sarah Crompton * Observer *
A gossipy but scholarly selection of memos, letters, postcards and emails from National talents including Olivier, Scofield, Stoppard, Pinter, Dench and Carol Ann Duffy. The theatre could surely get a great show from the book. -- Mark Lawson * New Statesman *
Incredibly accessible, great fun and nostalgic in the very best way. It cannot be recommended highly enough. * British Theatre Guide *
One of the best books I've ever been given to review ... The perfect gift for anyone who loves the theatre. -- Jo Good, BBC
A must-read for theatre fans * Jewish Chronicle *
Such exchanges will intrigue anyone who has taken a close interest in the landmarks of twentieth century theatre. The book's varied insights are invaluable too ... riveting -- Libby Purves * TLS *
The best book on the performing arts to have been published in years * Daily Mail *
This fascinating tome offers an insider's history of the National Theatre, via some 800 letters exchanged between Artistic Directors, actors, directors, playwrights, politicians, agents, critics and more. From arcane trivia through to vigorous words on the very nature and purpose of drama, it's a theatre geek's must-have. -- Marianka Swain * Broadway World *
Compulsive reading ... The fascinating result is like eavesdropping on theatrical history ... However, the book transcends gossip to expose the highs and lows of being at the helm of a national institution ... The book provides the best insight since the publication of Peter Hall's Diaries into how the National works ... I recommend Dramatic Exchanges for its exposure of the private faces of people in public places. -- Michael Billington * Country Life *
Praise for The National Theatre Story: The story of the National Theatre is as packed with drama as anything it has staged * Sunday Times *
This is a story with guts, great actors, laughter, disaster, and other properties that most books don't possess -- Michael Coveney * Independent *
A uniquely revealing story of life within a great cultural institution. * The Spectator *
This is a book to dip in and out of, take it at a leisurely pace, and it will keep surprising and informing you for years to come. * The Stage *

About Edited by Daniel Rosenthal

Daniel Rosenthal is a writer and lecturer. He has written on theatre and film for The Times, Independent and Observer, and his previous books include the award-winning The National Theatre Story, 100 Shakespeare Films and Student Editions of David Mamet's Oleanna and Patrick Marber's Closer. He has chaired 30 National Theatre Platforms and is Associate Producer of the BBC 4 Arena documentaries on the NT.

GOR009410573
Dramatic Exchanges: Letters of the National Theatre by Edited by Daniel Rosenthal
Edited by Daniel Rosenthal
Used - Very Good
Hardback
Profile Books Ltd
2018-11-01
416
1781259356
9781781259351
N/A
Book picture is for illustrative purposes only, actual binding, cover or edition may vary.
This is a used book - there is no escaping the fact it has been read by someone else and it will show signs of wear and previous use. Overall we expect it to be in very good condition, but if you are not entirely satisfied please get in touch with us.